The Prophet Jeremiah writing about the destruction of Jerusalem and the sin and punishment of Judah uses a common belief of the Jews of his times- that a partridge gathers up as his own another’s baby birds- to warn about the ransacking of foreign nests.

Today’s ecumenists, using the name of Orthodoxy, gather to themselves a flock and “travel over land and sea to win a single convert, and when they have succeeded, they make them twice as much a child of hell as they are” Matthew 23:15.

They offer to others the pseudo-Orthodoxy which they have adopted in place of the true Orthodoxy we received from the Holy Apostles and Church Fathers.

The brood- human souls- belong to Christ and only in the full truth of Holy Orthodoxy can anyone become a member of the Church that Christ established with His Holy Blood. 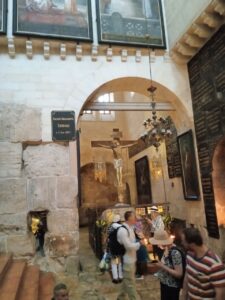 The Judgment Gate at St. Alexander Nevsky’s from our 2022 Recent Pilgrimage to the Holy Land