Alexander Prokhanov
“Let’s not forget: in the forties, an amazing merger of Russian eras took place. Pagan, with Prince Svyatoslav [‘damned’, as the Orthodox Church calls him], who fought off the Khazars. Orthodox, in which the great Russian commanders and saints acted – Alexander Nevsky and Dmitry Donskoy. Monarchist with Peter, Suvorov, Kutuzov. In the smoke of the battles of the Patriotic War, they were combined with the brilliant “reds” Zhukov, Vasilevsky, Rokossovsky, about which Joseph Stalin announced so clearly and loudly from the Mausoleum. … Only the For Victory bloc has the right to claim the breadth of the entire nation. The ideology of the “For Victory!” Bloc – this is a long-awaited national idea … Victory is also that sacred word that fills the Russian heart with pride and freedom. “
Alexander Prokhanov continued the theme: “Victory is not just a national idea. Victory is a creed, a special religious mentality of Russians. An Orthodox, a Muslim, an atheist, and a passionate believer will find a place under the dome of Victory. Of course, in order to reveal this doctrine, you need your own heralds, such as John the Theologian. We need our own builders and organizers. In the creation of this religious philosophy there is a place for artists and sculptors, sociologists and political scientists, historians and politicians. “
“We have yet to build this great Russian doctrine – Victory! In it, for centuries, a miracle that was expected from the Magi, passed from mouth to mouth, from Kievan Rus to the Moscow principality, from the empire of tsars to the red empire of leaders. This is the hope for universal good, for universal love. Understanding that the world is ruled not by blind forces of matter, but by Justice, Divine truth … “
Orthodox authors rushed to support this ideology. Movements arose for the canonization of such “strong leaders” as Ivan the Terrible and Rasputin. Stalin’s “icons” appeared. And, what is most terrible and blasphemous, the anniversary of the Soviet victory on May 9, 1945, was presented by some as a “holiday of the holidays”, comparable to Easter – and even as Easter itself! So, in an article on the patriarchal website, we read: 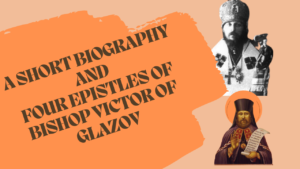