We know that one of the people who first believed in the preaching of St. Paul the Apostle in Greece was St. Dionysius the Areopagite or judge. He was there when the Apostle Paul preached at the Areopagus in Athens as it is recorded in the Book of Acts.

22 Paul then stood up in the meeting of the Areopagus and said: “People of Athens! I see that in every way you are very religious. 23 For as I walked around and looked carefully at your objects of worship, I even found an altar with this inscription: to an unknown god. So you are ignorant of the very thing you worship—and this is what I am going to proclaim to you.

24 “The God who made the world and everything in it is the Lord of heaven and earth and does not live in temples built by human hands. 25 And he is not served by human hands, as if he needed anything. Rather, he himself gives everyone life and breath and everything else. 26 From one man he made all the nations, that they should inhabit the whole earth; and he marked out their appointed times in history and the boundaries of their lands.27 God did this so that they would seek him and perhaps reach out for him and find him, though he is not far from any one of us. 28 ‘For in him we live and move and have our being.’[a]As some of your own poets have said, ‘We are his offspring.’[b]

29 “Therefore since we are God’s offspring, we should not think that the divine being is like gold or silver or stone—an image made by human design and skill. 30 In the past, God overlooked such ignorance, but now he commands all people everywhere to repent.31 For he has set a day when he will judge the world with justice by the man he has appointed. He has given proof of this to everyone by raising Him from the dead.

The early Christian historian, Eusebius of Caesarea in his Ecclesiastical History tells us that when St. Dionysius learned that the Mother of God lived in Jerusalem, he traveled to Jerusalem to meet her. From this meeting he said: “Her appearance, her features, her whole appearance testify that she is indeed Mother of God.” In Jerusalem, he also discovered where the Most Holy Theotokos fell asleep and departed this world to join her Son and her God. Then he wept sorely like the Apostles and attended the Theotokos’ funeral in Jerusalem. 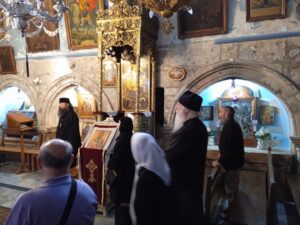 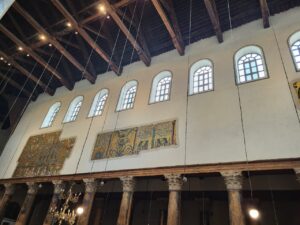 2022 Holy Land RTOC Pilgrimage – Basilica of the Nativity, St. Symeon the God-Receiver, the Relic of St. Savva, the Cistern of St. Helena,