The Church calls tomorrow’s Sunday the Sunday of the Samaritan, that is, the Sunday of the Samaritan Woman because at the Divine Liturgy the Gospel narrative is about how our Lord Jesus Christ spoke at Jacob’s Well with the Samaritan woman, turning her to the light [of truth] and towards a good and pious life.  In this moving narrative, we all see, above all, a lesson for us about how careful we ought to be in judging our neighbors, and to avoid all condemning judgment of them, remembering what the Gospel tells us.
The Savior sat down, being wearied with His journey, at Jacob’s Well. The Samaritan woman came to draw water and, when the Lord said to her Give Me to drink [Jn 4:7], He received a cold, alienating reply: How is it that Thou, being a Jew, askest drink of me, which am a woman of Samaria? [Jn 4:9]. This is essentially a refusal. Later it is added: For the Jews have no dealings with the Samaritans [Jn 4:9]. It is not entirely clear whether these are the words of the Samaritan woman, which she added, or whether the Evangelist wrote them for the reader’s explanation. Either way, despite this near refusal and the coldness and alienation of this reply, the Lord did not cease his conversation with her. Already after His following words, we see how this Samaritan woman’s tone of speech changed dramatically. He said to her: If thou knewest the gift of God, and Who it is that saith to thee, Give Me to drink; thou wouldst have asked of Him, and He would have given thee living water [Jn 4:10]. It turned out that, although this Samaritan woman was a great sinner, as is seen from what follows, a living heartbeat under the bark of the passions. And this living heart sensed that before it was Someone, an entirely unusual Man. She immediately changed her tone, saying: Sir, Thou hast nothing to draw with, and the well is deep: from whence then hast thou that living water [Jn 5:11]. The Lord converses with her further about this living water and, in the end, His wise conversation, filled with love, finally leads her to this phrase: I know that Messiah cometh, which is called Christ: when He is come, He will tell us all things [Jn 5:25]. He will explain everything to us, tell us everything. And she hears this reply: I, that speak unto thee am He [Jn 5:26].
The Samaritan woman was stunned, of this, there can be no doubt, for here we already see no reply from her side. Probably her “tongue clove to her throat,” as they say, for she sensed the full, righteous, holy, and terrible truth of these words. Immediately throwing down her water pot, not paying any attention to Him, she hastened, probably, to run into the city to tell all the city’s inhabitants that they should come and look if This Man is not the Christ, Who had told her everything about herself when He could not have known this.
This is our lesson: Our Lord saw that this woman had a living heart underneath the bark of sin. There are people who appear to live entirely decorously but are dead in spirit. She had not died spiritually, for all the filth she had lowered herself into. We see this from the way that, as soon as she saw that He knew things that could not have been known to Him in the natural order of things, she immediately asked Him spiritual questions and said: Thou art a prophet [Jn 5:19]. She immediately asks Him how one should properly worship God: in the way the Jews say, or the way the Samaritans say? This means that her soul was alive in her. This means that this thought lived in her, as did confusion and searching: where, namely, is the correct worship and veneration of God? The wisdom with which the Lord led her further and further in His conversation, led her finally to say: the Messiah will tell us all things [Jn 5:25]. And she heard the answer.
May each of us learn from this to condemn no one! This very Samaritan woman had been a sinner, but she later became righteous. And not just righteous, for the Church glorifies her as the Holy Martyr Photini the Samaritan Woman, who suffered for Christ. Therefore it follows that we should never condemn anyone: we do not at all know a person’s inner world.
Let us recall another astonishing miracle when the Lord attracted yet another lost soul to Himself through love and wisdom: Zacchaeus the publican. The Lord had just seen him, had just entered his home when he already said: This day is salvation come to this house [Lk 19:9]. Why? Because the Lord saw in the soul of this publican, given over to lawless greed, a bright spark. The Lord wisely lit this spark into a flame, and Zacchaeus became a righteous man. May these evangelical examples teach us to judge ourselves, but not others. For it was not all that long ago that we asked the Lord to grant us to see our failings and not condemn our brothers. The Gospel shows us that we have no right whatsoever to condemn, because we do not know what is in a person’s soul. Amen.

SERMON ON THE SUNDAY BEFORE THEOPHANY BY ABP. TIKHON (UNOFFICIAL ENGLISH TRANSLATION) 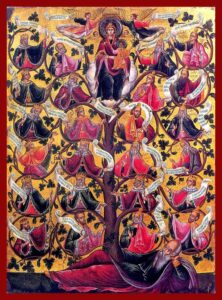