HOW TO BE A CHRISTIAN MISSIONARY
The Lord provides us with a perfect example in all things, including how to convert unbelievers to the faith. This is what we see in his conversation with the Samaritan woman in the Gospel according to John, chapter 4. Let us draw some lessons from this fascinating dialogue:-
1. Do not begin with the faith itself, but with a subject close to the potential convert’s ordinary, everyday life at this point. The Samaritan woman came to Jacob’s well to draw water, a very important everyday task in that hot climate. So the Lord asks her for water and then tells her where she can find “living water” – that is, as the woman understands Him, continually running water. But this is not what the Lord means: He means the continually running water of the Holy Spirit. But to speak openly and directly about that at the beginning would have been unproductive. So He acts more subtly: first drawing her attention by speaking about material water, the Lord turns the conversation to spiritual water, the grace of the Holy Spirit – but in a hidden, symbolic form that intrigues His listener. 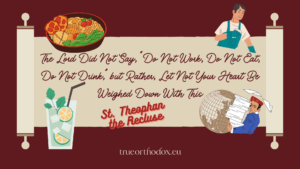 The Lord Did Not Say, “Do Not Work, Do Not Eat, Do Not Drink,” but Rather, Let Not Your Heart Be Weighed Down With This 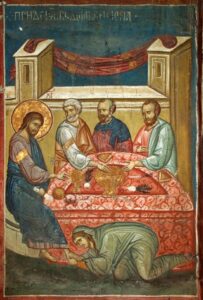