The Most-Holy Virgin, the Mother of God, lived for some fifteen or twenty years following the Ascension of the Lord Jesus Christ into Heaven. During this time, she was as a wanderer fervently wishing to return to her homeland, preparing herself for the heavenly abode. And finally, the day came, and she paid the debt to her physical nature, death.

For three days before her blessed end, amid burning prayer on the Mount of Olives, Archangel Gabriel announced to her that she would make the final passage, and gave her a frond from heaven. The Heavenly Queen, the Mother of God, was not confounded, she did not fear for her moment of death and joyously took to her deathbed. In response to her wish, the Holy Apostles were miraculously gathered at her deathbed to pay their last respects at her funeral. On August 15, at three in the afternoon, when the Most Holy Virgin Mary lay on her deathbed awaiting her end, and suddenly the light of Divine glory shone forth, and all the candles burning in her home were extinguished. The Apostles and others in attendance were astounded by what they saw.

The roof of the house seemed to disappear, and Jesus Christ Himself descended into the room, surrounded by angels, the Holy Fathers, and Prophets, and approached His Mother. Seeing Her Son, the Holy Mother was overjoyed; rising from her deathbed, she bowed before Him and peacefully and painlessly left this earth, entrusting her Most-Pure soul to Her Son and Her God. It was as though she had not died but only fell into a deep sleep, because in 2-3 days she rose to eternal life.

For the Most-Holy Mother of God, death was simply a passage into another existence, the beginning of a new, blessed life, when she entered into constant communion with God and her glory then shone forth with Divine miracles (the second sticheron on “Lord I have cried”).

From the story of the Dormition of the Mother of God, we see how peacefully, painlessly, how happily our Queen, the Most-Holy Mother of God presented herself to God. This was a truly Christian death, which is so sweet for the pure soul, for it is nothing more than moving from this sinful world to the joy of eternal heaven. The Most-Merciful Lord will send to each righteous person His holy Angels upon death, as we know from the parable of the Rich Man and Lazarus. The righteous do not die, but like lifelong travelers return home for eternal rest. Let us remember the death of Prophet Jacob: his children surrounded his bed, and he blessed each one of them, then lay down and painlessly passed into the other world, to the better, heavenly world. And this was during the Old Testament before death was trampled by the death of Christ.

In the New Testament, death was put to death, and we were given life, so the true Christian does not die so much as falls asleep. “Children,” said St John the Theologian to his followers, “dig me a grave!” He entered the grave and gave his soul over to God. Sensing his impending death, St Dimitry of Rostov summoned choir singers and had them sing several favorite church prayers; then, dismissing everyone, he sank to his knees before an icon of the Savior and died. “Precious in the sight of the Lord is the death of His saints.” All the martyrs and ascetics proved this truth in life and in death. Some of them preserved constant prayer and kneeling, redeeming their peaceful souls. Others were burned alive, or faced the executioner’s blades but with joyful faces, praising Christ the Lord and rejoicing at their speedily approaching unification with Him. In our daily lives, we also witness the good Christian deaths of the righteous.

As death approaches a person who lived and tended to his soul, he senses the proximity of the end but is convinced that by the will of the Merciful Father in Heaven, it is unavoidable, and ponders it in peace. True, he sympathizes with his friends and relatives, for he has loved them, and separation is difficult, but he believes that there, beyond the grave, in the land of the living, he will once again meet them. His body may ache, but such sufferings are mitigated by the knowledge that this ancient temple of his body must be destroyed in order for the soul it harbors to rush to the One Who is the Source of eternal life. By genuine repentance, they cleanse their sinful wounds. The servant of God, a pastor of the Church, a spiritual father carries with him the deposit towards eternal life the Holy Mysteries he administers Holy Communion, he pours quiet joy into the soul of the righteous, the foretaste of eternal life. And in the moment of mysterious death, the icy breath covers the face of the dying, but without any doubt, the Merciful gaze of the Savior will open for him the Kingdom of Eternity, and his Guardian Angel stands at the deathbed in order to take the believing and loving soul and escort it to the heavenly abodes.

Yet this is not the death of the sinner. Even in luxurious mansions, within elegantly-appointed chambers, he dies a horrible death. In this terrifying moment of death, the wicked demons surround his deathbed, and with all the demonic power of their impatience for the soul to depart the body, they seize it to drag into the darkness of Hades. His conscience will awaken, but it will be too late. He will see that his reliance on his treasures will have been in vain.

His riches will be left behind on earth, and he will depart for the other world to the Righteous and Virtuous Judge. His pleasures had held him captive, but the time now comes when pleasures are exchanged for agonies. He sees that his entire life was a great mistake, that I have profaned my soul with shameful sins and have wasted my life in laziness. For the sinner, the agony of Hades sometimes already begins on earth. The Word of God and the history of the Church have preserved for us several horrifying examples: Herod, the murderer of the Infants of Bethlehem, was eaten alive by worms. Judas the Betrayer and Arius the Heretic died degrading deaths. When you read about this, you cannot but fear for yourself. For these people were once good: Judas was an Apostle, and so among the finest of men. Arius was a scholar and a pious man in his own right. Herod was a wise man: he was called “the Great” for good reason. But this is what sin does to man, and this is the bitterness of the death of a sinner.

Most-Holy Queen, Mother of God, you in your honorable Dormition stood before the very Throne of the Omnipotent. Beseech your Son that He gives us living on earth the strength and endurance to fervently seek Heaven, as did you; may He then allow us a peaceful Christian death, and upon arrival in the world on high, grant us consolation and endless holy joys which you enjoy in the Kingdom of His Glory.

Fr Alexander served in the city of Saratov under Vladyka Germogen (Dolanev),
and in 1910-1912 served at the Chapel of Saratov Seminary, and from 1912
at Holy Transfiguration Church in Saratov, then appointed its Rector in 1917. 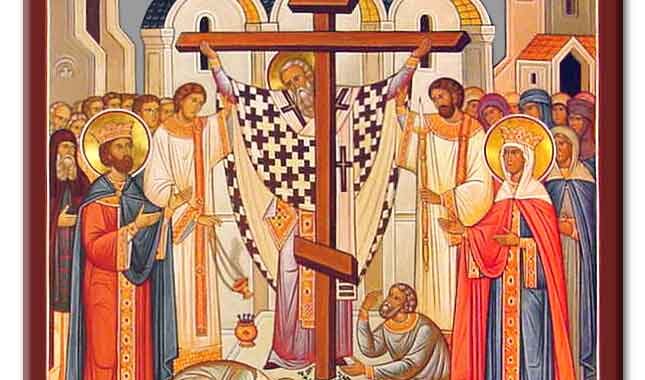 The Elevation of the Holy Cross