Thank you to Brother Michael

A. Points of Difference between the Orthodox and the Protestant religious teachings:

1) The Orthodox Church recognizes as a source of divine revelation of Truth not only Holy Scripture but also Holy Tradition which totally agrees with the Scriptures and is always recognized by the entire ancient Christian churches. The Orthodox Church recognizes the Ecumenical Councils as inviolable witnesses of this tradition, which were all assembled before the renovations of the Roman Church and the split of the latter from the Oriental (Orthodox), that is prior to the ninth century.

2) In the Orthodox Church it is not the Apostolic Creed as known in the West, but the Nicean-Constantinopolitan (composed during the First and Second Ecumenical Councils) which is read or sung during public and private divine services, without the Roman addition of the Filioque, which teaches that the Holy Spirit proceeds not only from the Father (John 15:26), but also from the Son.

3) Besides the two sacraments of Baptism and Holy Communion, from apostolic times the Orthodox Church also includes the following five: Chrismation, Confession, Priesthood, Matrimony, and Holy Unction. The ordination to Priesthood takes place from the Holy Apostles in an unbroken line of succession of bishops and only then is recognized as valid.

4) The Orthodox Church is the spiritual and, through faith and love, forever united assembly of all the living and departed faithful. In the Orthodox Church, the expression of this unity in faith and love is found in her prayers for the departed, the ideas of purgatory and the letter of indulgence of the Roman Church being completely foreign to her; on the other hand she invokes God through her glorified Saints, without participating in the Roman error of exaggerating the merits of the Saints or praying to them as to some superhuman beings.

5) The Orthodox Church holds it proper to possess and venerate sacred images of Christ and the Saints in churches and in the home, not in order to worship them, which is strictly forbidden by the Church, but through gazing at the sacred images to kindle a desire to remember and imitate the pious attributes and glorious deeds of the depicted.

B. The main points of difference between the Orthodox and the Roman religious teachings are, besides the above mentioned (of which the dogmatic innovation concerning the teaching about the Holy Spirit is considered the most important), the following:

1) The Vatican Proclamation about the infallibility of the Pope and his absolute power over Christendom, which is contrary to the faith of the ancient Church and contradicts and destroys the constitution of the Church, and the proclamation of Pope Pius IX in 1854 on the Immaculate Conception of the Virgin Mary, which is not grounded in Holy Scripture and Tradition, are absolutely foreign to the Orthodox Church. She believes in Jesus Christ as her single eternal Head, and in the Holy Spirit as her highest ruler and director. Infallibility and the highest authority to determine Christian truth belong, as already mentioned, to the whole Orthodox Church, whose voice, inspired by the Holy Spirit, directed Ecumenical Councils.

2) In the Holy Eucharist, the faithful receive both particles as always and to this day.

3) Celibacy and the diverse monastic orders are unknown in the Orthodox Church. The clergy (priests) are free to marry before ordination or, to remain unmarried. Those who do not marry and wish to enter a monastery must profess the vows of obedience, poverty, and virginity. Educated monastics usually serve for a while at theological institutes and are later elevated to the rank of bishop.

4) The divine services are celebrated in the language of the country.

5) The Church also strives to spread the Holy Scripture in the language of the laypeople. 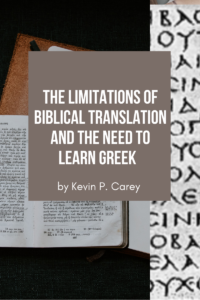 The Limitations of Biblical Translation and the Need to Learn Greek by Kevin P. Carey

1 thought on “Points of Difference Between Orthodox and Protestant Religious Teachings From the correspondence of the New Martyr Grandduchess Elizabeth with her father, Grandduke Louis IV of Hesse and the Rhine, 1891”