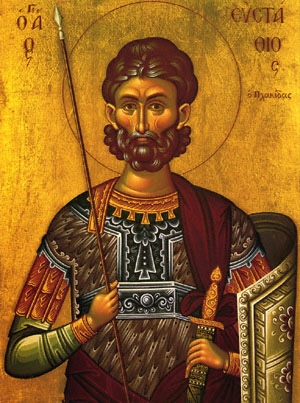 Holy Great Martyr Eustathios was named Placidas before Baptism. He was a military commander under the emperors Titus (79-81 AD) and Trajan (98-111 AD). Even beore he came to know Christ, Placidas did acts of charity, helping the poor and destitute. The Lord deigned not to leave the virtuous pagan remain within the darkness of idol-worship.

Once while hunting in a forest, he saw a stag, which, while fleeing, would stop now and then to look him, right in the eye. Placidas pursued it on horseback, but could not catch up. The stag leaped over a chasm and stood on the other side facing the saint. Placidas suddenly saw a radiant Cross between its antlers. In surprise, Placidas heard a voice coming from the Cross saying: “Why do you pursue Me, Placidas?” “Who are You, Master?” asked Placidas. In reply, he heard, “I am Jesus Christ, Whom you do not know, yet you honour Me by your good deeds. I have appeared here on this creature for your sake, to capture you in the net of My love for mankind. 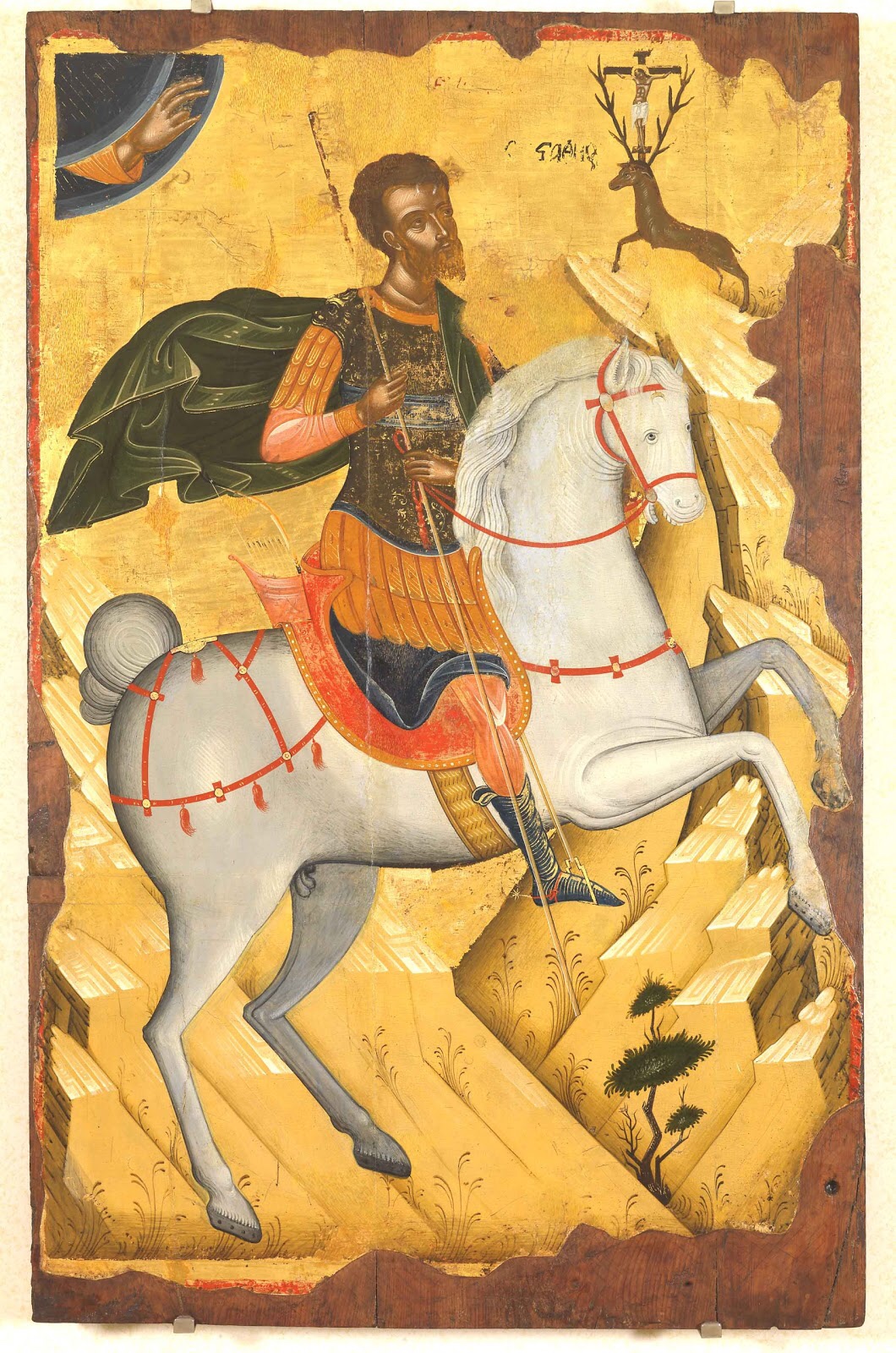 It is not fitting that one as righteous as you should worship idols and not know the truth. It was to save mankind that I came into the world”. Placidas cried out, “Lord, I believe that You are the God of Heaven and earth, the Creator of all things. Master, teach me what I should do”. Again the divine voice spoke, “Go to the bishop of your country and receive Baptism from him, and he will instruct you”.

With joy Placidas returned home and told everything to his wife Tatiana. She in turn told him how the evening before in a mysterious dream she had been told, “Tomorrow you, your husband and your sons on the morrow shall come to Me and know that I am the true God. The spouses then proceeded to do as they had been bidden. They hastened to the Christian Bishop, who baptized all their family, and communed them with the Holy Mysteries. Placidas was renamed Eustathios, his wife was called Theopiste, and their children, Agapius and Theopistus. 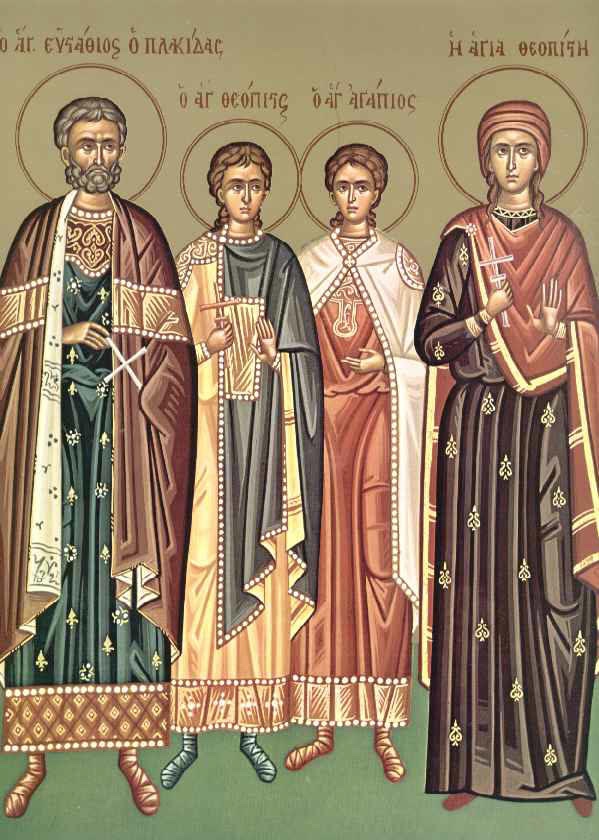 On the following day, St Eustathios set out to the place of his miraculous conversion and in fervent prayer he offered up thanks to the Lord for having called him onto the path of salvation. Again, St Eustathios received a miraculous revelation. The Lord Himself foretold his impending tribulations, “Eustathios, you shall suffer many misfortunes, as did Job, but in the end you will conquer the devil”. Soon St Eustathios was plunged into misfortune; all his servants died of the plague and his cattle perished. Brought to ruin, but not despairing in spirit, St Eustathios and his family secretly abandoned their home, to live unknown, humble and in poverty. They went to Egypt to board a ship sailing for Jerusalem. During the voyage, a new woe beset the saint. The ship owner, enchanted by the beauty of Theopiste, cruelly set Eustathios and his children ashore, keeping the wife for himself. In great sorrow, the Saint continued on his way, and new woe beset him. Coming to a tempestuous river, he went to carry his two sons across in turn. When he had brought one across, the other was seized by a lion and carried off into the wilderness. As he turned back towards the other, a wolf dragged that child into the forest.

Having lost everything, St Eustathios wept bitterly. However, he realized that Divine Providence had sent him these misfortunes to test his endurance and devotion to God. In his inconsolable grief, St Eustathios went on farther, prepared for new tribulations. In the village of Badessos he found work and spent five years in unremitting toil. St Eustathios did not know then that through the mercy of God, shepherds and farmers had saved his sons, and they lived right near him. He also did not know that the impudent shipowner had been struck down with a terrible disease and died, leaving St Theopiste untouched. She lived at the place where the ship landed in peace and freedom. During this time it had become difficult for the emperor Trajan to raise an army for Rome to deal with a rebellion, for the soldiers would not go into battle without their commander Placidas. They advised Trajan to send men out to all the cities to look for him.

Antiochus and Acacius, friends of Placidas, sought him in various places. Finally, they arrived in the village where St Eustathios lived. The soldiers found Eustathios, but they did not recognize him and they began to tell him of the one whom they sought, asking his help and promising a large reward. St Eustathios, immediately recognized his friends, but did not reveal to them his identity. He borrowed money from one of his friends and fed the visitors. As they looked at him, the travellers noted that he resembled their former commander. When they saw a scar on his shoulder from a deep sword-wound, they realized that it was their friend there before them. They embraced him with tears and told him why they were seeking him.

St Eustathios returned to Rome with them and again became a general. Many new recruits were drafted into the army from all over the empire. He did not know that two young soldiers who served him, and whom he loved for their skill and daring, were actually his own sons. They did not know that they were serving under the command of their own father, or that they were brothers by birth. While on campaign, the army led by Eustathios halted at a certain settlement. The soldier-brothers were talking in their tent. The elder one spoke about his life, how he had lost his mother and brother, and how in a terrifying way he had been parted from his father. The younger brother then realized that before him was his very own brother, and told him how he had been rescued from the wolf. A woman overheard the soldiers’ conversation, since their tent was pitched right next to her house, and this woman realized that these were her sons. Still not identifying herself to them, but not wanting to be separated from them, she went to their commander, St Eustathios, to ask him to take her to Rome with him. She said she had been a prisoner, and wanted to go home. Then she came to recognize the commander as her husband, and with tears, she told him about herself and about the two soldiers who were actually their sons. Thus, through the great mercy of the Lord, the whole family was happily reunited.

Soon thereafter the rebellion was crushed, and St Eustathios returned to Rome with honour and glory. The emperor Trajan had since died, and his successor Hadrian (117-138 AD) wanted to celebrate the event of victory with a solemn offering of sacrifice to the gods. To the astonishment of everyone, St Eustathios did not show up at the pagan temple. By order of the emperor they searched frantically for him. “Why don’t you want to worship the gods?” inquired the emperor. “You, above all others, ought to offer thanks to them. They not only preserved you in war and granted you victory, but also they helped you find your wife and children”. St Eustathios replied, “I am a Christian and I glorify and give thanks to Him, and I offer sacrifice to Him. I owe my life to Him. I do not know or believe in any other god than Him”.

In a rage, the emperor ordered him to take off his military belt and brought him and his family before him. They did not succeed in persuading the steadfast confessors of Christ to offer sacrifice to idols. The whole family of St Eustathios was sentenced to be torn apart by wild beasts, but the beasts would not touch the holy martyrs. Then the cruel emperor gave orders to throw them all alive into a red-hot brass bull, and St Eustathios, his wife Theopiste, and their sons Agapios and Theopistos endured a martyr’s death. Before being placed in the bull, St Eustathios prayed, “Grant, O Lord, Your grace to our relics, and let him who calls upon us have a place in Your Kingdom. Though he call upon us on a river or on the sea, when he is in danger, we entreat You to come to his aid”.

Three days later, they opened the brass bull, and the bodies of the holy martyrs were found unscathed. Not one hair on their heads was singed, and their faces shone with an unearthly beauty. Many seeing this miracle came to believe in Christ. Christians then buried the bodies of the Saints in 126 AD.