Fifteenth Sunday after Pentecost
Master, Which is the Great Commandment?

From The Explanation of the Gospel of St. Matthew

by Blessed Theophylact, Archbishop of Ochrid and Bulgaria

34-40. But when the Pharisees had heard that He had put the Sadducees to silence, they were gathered together. Then one of them, which was a lawyer, asked Him a question, testing Him, and saying, Master, which is the great commandment in the law? Jesus said unto him, Thou shalt love the Lord thy God with all thy heart, and with all thy soul, and with all thy mind. This is the first and great commandment. And the second is like unto it, Thou shalt love thy neighbour as thyself. On these two commandments hang all the law and the prophets. Out of immeasurable spite this man comes forward to put the Lord to the test. For when they saw the Sadducees put to shame and the Lord praised for His wisdom, they came forward to test Him to see if He would add something to the first commandment, and thus give them the chance to accuse Him of being an innovator who corrects the law. But the Lord discloses their malice, and because they came not to learn, but rather, devoid of love, to show their envy and their spite, He reveals to them the exceedingly great love expressed by the commandments. And He teaches that we ought not to love God partially, but to give all of ourselves to God. For we perceive these three distinctions of the human soul: the vegetative, the animal, and the rational. When the soul grows and is nourished and begets what is like unto it, it resembles the plants; when it experiences anger or desire, it is like the animals; when it understands, it is called rational. See, then, how these three facets are indicated here. Thou shalt love thy God with all thy heart—this is the animal part of a man; and with all thy soul (or life)—this is the vegetative part of a man, for plants are alive and animate; and with all thy mind—this is the rational. So one must love God with all one’s soul, that is, attend to Him with all the parts and powers of one’s soul. This is the first and great commandment, training us in piety. The second is like unto it, exhorting us to do to other men what is just and right. For there are two things which lead to perdition, evil doctrines and a corrupt life. Lest we fall into unholy doctrines, we must love God; so that we do not lead a corrupt life, we must love our neighbor (see Levit. 19:18). For he who loves his neighbor fulfills all the commandments, and he who fulfills all the commandments, loves God. So by means of each other these two commandments are welded together and united, containing within themselves all the other commandments. Who is it that loves God and his neighbor, but also steals, or bears grudges, or commits adultery, or murders, or fornicates? This lawyer, then, at the onset came to test Him but then, hearing Christ’s answer, he amended his ways, and the Lord praised him, as Mark also says that Jesus looked at him with love, and said, Thou art not far from the kingdom of heaven (Mk. 12:34).

41-46. While the Pharisees were gathered together, Jesus asked them, saying, What think ye of Christ? Whose son is He? They say unto Him, The son of David. He saith unto them, How then doth David in spirit call Him Lord, saying, the Lord said unto my Lord, Sit Thou on My right hand, till I make Thine enemies the footstool of Thy feet? If David then call Him Lord, how is He his son? And no man was able to answer Him a word, neither dared any man from that day forth ask Him any more questions. Since they thought He was a mere man, He overturns their belief and by means of the prophecy of David (Ps. 109:1) teaches the truth, that He is also the Lord, proclaiming His own divinity. For when the Pharisees said that the Christ was the son of David, that is, a mere man, He says, How then does David name Him Lord, and he does not simply name Him Lord, but in spirit, that is, as revealed to him by the grace of the Spirit? He does not say this to deny that He is the son of David, but to show that He is not a mere man, descended only from the Davidic seed. The Lord asks these questions so that if they would answer, “We do not know,” they might ask and learn; or if they would answer the truth, that they might believe; or if they could not answer, that they might be put to shame and leave, no longer daring to interrogate Him. 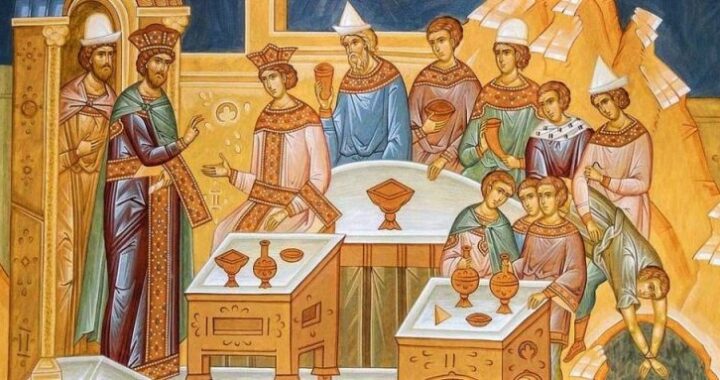 Fourteenth Sunday after Pentecost- Parable of the Wedding Feast

The Parable of the Vineyard Workers 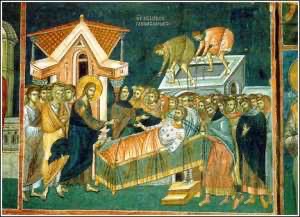 Sermon on the Sixth Sunday after Pentecost: the Paralytic.
By Archbishop Andrei Rymarenko, spiritual father of Saint Philaret the Confessor of ROCOR.