Testimonies from the Holy Scriptures and the Holy Fathers on the Necessity of Having No Communion with Heretics and Schismatics, the Enemies of Christ

“And the Lord said to Moses and Aaron: This is the law of the Passover: no stranger shall eat of it. And every slave or servant bought with money him thou shalt circumcise, and then shall he eat of it. A sojourner or hireling shall not eat of it. In one house shall it be eaten.” (Exodus 12:43-46)

St. Apraphat of Syria writes that the “one house” in which the Passover is to be eaten is “the Church of Christ”, and that just as the slave could not eat the Passover unless he was circumcised, so the sinner “comes to Baptism, the true Circumcision, and is joined to the People of God, and communicates in the Body and Blood of Christ”. (St. Apraphat of Syria, Demonstrations 12, 525.8, 525.12.)

“Let no-one communicate who is not of the disciples. Let no Judas receive, lest he suffer the fate of Judas I would give up my life rather than impart of the Lord’s Blood to the unworthy; and I will shed my own blood rather than give such awful Blood contrary to what is right.” (St. John Chrysostomos, Homilies on Matthew, 83.6.)

“With all our strength let us beware lest we receive Communion from or give it to heretics. ‘Give not what is holy to the dogs,’ says the Lord. ‘Neither cast ye your pearls before swine’, lest we become partakers in their dishonour and condemnation.” (St.John of Damascus, Exposition of the Orthodox Faith, IV, 13.)

“Holy things to the holy!” (The Divine Liturgy)

“Let any Bishop, or Presbyter, or Deacon that merely joins in prayer with heretics be suspended, but if he has permitted them to perform any service as clergymen, let him be deposed.” (Apostolic Canon 45)

“Let any clergyman or layman who enters a synagogue of Jews, or of heretics, to pray be both deposed and excommunicated.” (Apostolic Canon 65)

“Concerning the necessity of not permitting heretics to come into the house of God, so long as they persist in their heresy.” (Canon 6 of the Council of Laodicea)

“That one must not accept the blessings of heretics, which are rather misfortunes than blessings.” (Canon 32 of the Council of Laodicea)

“That one must not join in prayer with heretics or schismatics.” (Canon 33 of the Council of Laodicea)

St. Maximus the Confessor said: “Even if the whole universe holds communion with the [heretical] patriarch, I will not communicate with him. For I know from the writings of the holy Apostle Paul: the Holy Spirit declares that even the angels would be anathema if they should begin to preach another Gospel, introducing some new teaching.” (The Life of St. Maximus the Confessor)

“Chrysostomos loudly declares not only heretics, but also those who have communion with them, to be enemies of God.” (St. Theodore the Studite, Epistle of Abbot Theophilus)

“Guard yourselves from soul-destroying heresy, communion with which is alienation from Christ.” (St. Theodore the Studite, P.G. 99.1216.)

“Some have suffered final shipwreck with regard to the faith. Others, though they have not drowned in their thoughts, are nevertheless perishing through communion with heresy.” (St. Theodore the Studite)

“The divine and sacred canons say: ‘He who has communion with an excommunicate, let him be excommunicated, as overthrowing the rule of the Church.’ And again: ‘He who receives a heretic is subject to the same indictment’ The great apostle and evangelist John says: ‘If anyone comes to you and does not bring this teaching with him, do not greet him and do not receive him into your house; for he who greets him communicates with his evil deeds’ (II John 10-11). If we are forbidden merely to greet him on the way, and if inviting him into our house is prohibited, how can it be otherwise not in a house, but in the temple of God, in the sanctuary at the mystical and terrible Supper of the Son of God Whoever belches out the commemoration of him who has been worthily cut off by the Holy Spirit for his arrogance towards God and the Divine things, becomes for that reason an enemy of God and the Divine things.” (From an Epistle of the Martyred Fathers of the Holy Mountain to Emperor Michael Palaeologus against the heretical Patriarch John Beccus of Constantinople)

“All the teachers of the Church, and all the Councils, and all the Divine Scriptures advise us to flee from the heterodox and separate from their communion.” (St. Mark of Ephesus)

“Be not unequally yoked together with unbelievers. For what partnership have righteousness and iniquity? Or what fellowship has light with darkness? What accord has Christ with Belial? What agreement has the temple of God with idols? For we are the temple of the living God.” (II Corinthians 6:14-16)

“Come out of her, My people, lest you take part in her sins, lest you share in her plagues.” (Revelation 18:4) 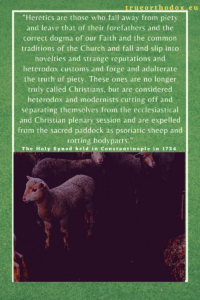