Before you see the video, I would like to point out the comments that may seem true but hide guile in them.

How will these spoons be cleansed when we know that we consume all of the remaining gifts at the end of the Divine Liturgy including any of the Holy Blood left upon the spoon because they are the Body and Blood of Christ which is never disposed of? If any disease was transferable through the Body and Blood of Christ, how come clergy who consume the gifts after everybody has received from the common spoon go on living? Why don’t they have every day of their lives flu and diseases and die?

If someone doesn’t “feel” comfortable (and probably didn’t even before COVID-19, as Elphidophoros said the “younger generation” and I would probably believe that the “younger generation” would be more idealistic unless they weren’t taught Orthodoxy – of course, they weren’t) receiving Christ for fear of a disease coming along with Christ then should they be receiving? Do they really truly believe that this is the Body and Blood of our Christ? That spoon each time goes completely into the chalice which is filled with Christ’s Blood. That spoon is covered in Christ!

Is this the first pandemic in the last 1500 years? Why wasn’t the common spoon replaced before or even discussed?

Think of the reasons why the common spoon were introduced. The ancient way of receiving communion in the hand was dangerous as the faithful grew weaker in Faith and careless. (Today they can’t even put antidoron in their mouth without filling the floor with crumbs of it!). “Hierarchs”, like “Metropolitan” Arsenios of Austria, talk about Early Christian communion being “safer” without mentioning that the early Christians all put their lips to the same cup!

“Elpidophoros” means “bearer of hope” but this “Archbishop” is proving to be the “bearer of despair”!

Here is the video: 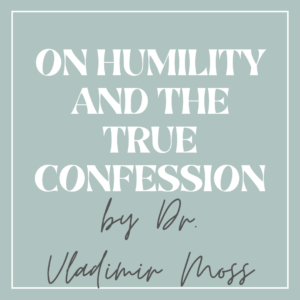 1 thought on ““Archbishop” Elpidophoros and the Communion Spoon”