In the name of the Father, Son, and Holy Spirit

Last night during the Vigil service and for the first time in the present cycle of Church services, we heard that penitent prayer which the Church addresses to God in our name: “Open unto me the doors of repentance, O Lifegiver…”

Our word repentance is usually taken to mean that one admits to having sinned and feels sorry that it was committed. But in the Greek language, the word for repentance is “metanoia,” which means much more than regretful admittance of wrongdoing. It indicates a steadfast reform of one’s life for the better, a sincere repentance in which a man labors to cleanse his soul. At first glance, it seems easy for one to reform: “I can stop sinning any time I want to. Only after one tastes even the least prayerful ascetic experience can one really understand. Only then does he feel himself to be overpowered by sin, sensing how deeply sin has penetrated his nature, realizing that he alone cannot conquer it. This is why the Church teaches us to turn to God, asking that He “Open the doors of repentance,” because, without God’s help, true repentance is not possible. As an answer to this supplication, we see the Lord’s parable of the Publican and the Pharisee, which we heard today.

There came two men to the Temple to pray. They both came to pray to God. Unfortunately, it happens often in our days, even in our Church Abroad, that people come to Church not so much to pray, as to meet with their acquaintances. The Church becomes but a social gathering place. But here, there came two men, one a Pharisee and the other a Publican.

The Holy Fathers say that the Pharisee probably stood in a conspicuous, honored place, and began his prayer with Thanksgiving. In this, he is an example to us. We often pray to God asking for something, but we never think of thanking Him, even though our very lives are the result of His beneficence. So the Pharisee thanks God; But for what things is he thankful? For such things as these: “…that I am not as other men are, extortioners, unjust, adulterers…” then he, adds, “…or even as this Publican.” Saint John Chrysostom notes with some irony: “He condemned the whole world; only did he justify himself.” Then he lists his good deeds: “I fast twice in the week, and I give tithes of all I possess.”

Let it be known to all us Christians that in these deeds we are to imitate the Pharisee. He fasted twice a week. According to the Church’s canons, we too have two fast days almost every week: Wednesday and Friday, but are they observed by us? The so-called “orthodox” Jews, those who zealously observe the Mosaic Law are very strict in observing all its regulations; woe to us if they are more zealous than we! The Pharisee also gave away one-tenth of his possessions to the poor. Would that we would all do the same! But despite these doubtless virtues of the Pharisee, the Lord still did not justify him, for he found them all worthless through his praise of himself. It was as if he had prepared a special meal, then ruined it by pouring over it stale oil. It is not to be denied that the Pharisee had real virtues, but he put them to naught by puffed-up boastfulness.

But what of the Publican? He stands far from the center of attention, not daring to lift· up his eyes to Heaven. He stands as one condemned, seeing only his sins. Indeed, he bore his sins, but he brings them now to the footstep of the Lord’s mercy and says only, “God, be merciful to me a sinner.” And the Lord manifests the worth or humility. The Publican humbly prays for mercy, he admits he is a sinner and through his warm and fervent prayer, he is pardoned. Because, as our Lord concludes the parable, “…everyone that exalteth himself shall be abased; and he that humbleth himself shall be exalted.”

In the past I have related the story told by the Optina elder, Ambrose, concerning the rich and pious lady who, because she did many charitable acts, she thought she had no serious sins. But once she was granted to see a vision; in a clearing stands the Lord Himself surrounded by people, speaking to them. She approached Him, confident that if, He spoke so freely with simple people, surely she could approach Him. But He took no notice of her. She tried very hard to get His attention, but He looked at her…and turned away! She was a pious woman, and what can be more terrible to a believer than having the Lord Himself turn away from him?

Speaking on the Last Judgment, St John Chrysostom notes that it is preferable to suffer a thousand Gehennas and be lashed by a thousand lightening bolts than to see the Lord turn away from you. Nothing is, nothing can be more terrible than this. The poor woman then became frightened, fell on the ground, and cried: “I am a terrible sinner. I am lost; what shall I do now that even the Lord turned away from me!” Lifting up her head she saw the Lord standing next her, looking at her mercifully and saying: “Now, this is, “how you should approach Me.”

Remember, O Christian soul, that when you do a good deed, the very opportunity to do it was from the Lord; so do not exalt yourself, but humbly thank the Lord from Whom descends “…every good giving and every perfect gift…” as it is said in a prayer of the Liturgy.

People come to Confession saying that they have no special sins. But is not there the hidden thought that there are people who sin in many ways, and the one who confessing is “not as other men are.” Is this not the Pharisee’s prayer?

Saint Gregory the Theologian said of himself that he is such a great sinner that he dared not look up to Heaven…yet we celebrate the feast of this great luminary today. And what can we say about ourselves? Let us only remember how humbly the Publican repented and how the Lord justified him for it. 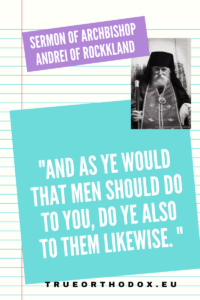 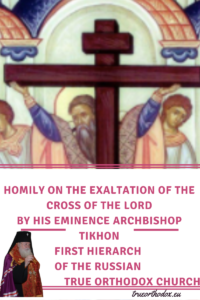 HOMILY ON THE EXALTATION OF THE CROSS OF THE LORD 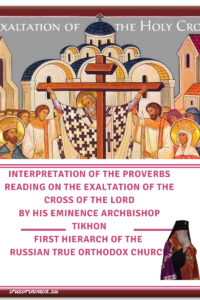 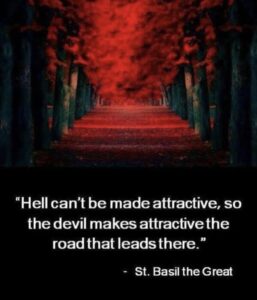