The icon Panagia Portaitissa (“She who resides by the door” or “Keeper of the gate”) also known as Theotokos Iverskaya, and more recently the Iveron Mother of God, is a wonder-working icon of the Theotokos that was, according to traditions, painted by the Apostle and Evangelist Saint Luke.

This icon is considered to be the most famous and revered miraculous icon of the Theotokos on the Holy Mountain. It is a pre-iconoclastic Byzantine icon, with dimensions of 1.37 x 0.94 m. The entire icon is encased by an 1819 gold and silver shirt covering the entire icon except for the faces. The most unique characteristic of the image is what appears to be a scar on the chin of the Virgin.

During the 9th century, this icon was the personal property of a devout widow from Nicea in Asia Minor, who kept it and honored it in her private chapel.

It was during the reign of the iconoclast Byzantine emperor Theophilus that soldiers came to the house of the widow. One of the soldiers struck the Icon with his sword, and immediately blood began to flow from the gashed cheek of the Virgin. Shaken by this miracle, the soldier instantly repented, renounced the iconoclast heresy, and entered a monastery. On his advice, the widow concealed the Icon in order to avert its further desecration.

After praying for guidance before the Icon, the widow put the Holy Image into the sea. The icon did not sink and stood upright on the water and began to drift towards the west, while the widow’s son, following her advice, also fled towards the west to escape persecution. Later, he became a monk and died on the northeast coast of Mount Athos near or in the Monastery of Clement (now Iviron Monastery). There he recounted the story of how his mother had set the Holy Icon upon the waves, and this story has been handed down from one generation of monks to another.

Many years later, the Icon made its appearance on the Holy Mountain. According to Athonite tradition, an amazing phenomenon puzzled all the monks of the Iveron area: a column of fire stood upright on the sea and reached to the heavens. At that time the holy monk Gabriel was one of the brotherhood in this monastery. The Mother of God appeared to him in a vision and directed him to convey to the abbot and brothers of the monastery that She wished them to have Her Icon as their help and salvation. She told Gabriel to approach the Icon on the waters without fear and take it with his hands. Obedient to the words of the Mother of God, says Athonite tradition, Gabriel “walked upon the waters as though upon dry land,” took up the Icon and brought it back to the shore. The icon was then brought into the monastery and placed in the altar.

Nevertheless, after its reception and installation in the church, the icon repeatedly disappeared and was found above the gate of the monastery on the inside. In a dream, the Blessed Virgin told St. Gabriel that this was the place which she herself had chosen so that she could protect the monks and not be protected by them. Thus the icon has taken the name of “Portaitissa” and to this day its presence in the monastery and on the Holy Mountain is regarded as a guarantee of the protection of Athonite monasticism by the Theotokos. Later, a chapel was built near the wall of the monastery in which the icon was placed, while the old entrance was closed and a grander one was built.

The miracles performed by the Portaitissa are unnumbered and are celebrated especially on August 15 and on Tuesday of Bright Week, when there is a procession and the finding of the icon is commemorated with a liturgy in the chapel on the shore, at the exact spot where St. Gabriel took it out of the sea.

The traditional name for this icon has always been the “Portaitissa” but in more recent times the Icon has come to be known as the “Iveron” Mother of God, in connection with the name of the monastery, by the American and Russian communities.

In 1648, news of this wonder-working Icon reached Russia through pilgrims who had visited Mt. Athos. The Patriarch Nikon of Moscow, while he was still Archimandrite of Novospassky Monastery, commissioned an exact copy of the Iviron icon to be made and sent to Russia. Almost immediately upon its arrival on October 13, the icon was glorified with numerous miracles attributed to it by the faithful. The Iverskaya Chapel was built in 1669 to enshrine the icon next to the Kremlin walls in Moscow. The chapel was the main entrance to Red Square and traditionally everyone, from the Tsar down to the lowest peasant would stop there to venerate the icon before entering the square. After the Bolshevik Revolution of 1917, the chapel was destroyed by the Bolsheviks and the icon was moved to the Resurrection Cathedral at Sokol’niki where many of the icons and relics from the closed and destroyed churches were placed (in other sources – it is one of the older replacement copies, the main icon from the Iverskaya Chapel was placed in the Tretyakov gallery museum). In 1995, the Iverskaya Chapel was rebuilt and new copy of the icon was made for it at Mt. Athos. 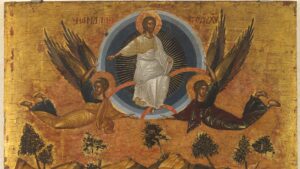