Concerning The Tomb of the Most Holy Theotokos

According to tradition, the Mother of God fell asleep in the Lord about 10 years after the crucifixion of our Lord God and Savior Jesus Christ.
St. Cyril of Jerusalem in his 20th Homily says that the death of the Theotokos took place in Sion (Jerusalem) on the 15 of August 43AD and that She was buried in Gethsemane.  Gethsemane means “olive press” being just below the Mount of Olives.

The writings say that she was buried in the Valley of Cedars, in the Garden of Joasaphat which is Gethsemane.  Saints Gregory of Tours, Isidore of Seville, Modestos and Sophronios of Jerusalem, Germanos of Constantinople, John of Damascus and Andrew of Crete the Jerusalemite all speak about the Tomb of the Theotokos outside of Jerusalem.  This place of the Garden of Joasaphat was a necropolis from the days before Christ and known as the “Necropolis of Zachariah” having the tombs of Absalom (the son of King David), Josaphat, St. James the Brother of the Lord, and Zachariah the son of Baruch.  In the first years of Christianity it was under the control of Christian Jews.

There is some doubt if St. Helen built a church here.  However, it would seem logical since she built temples in all the important places of Christianity when she visited there after the First and Holy Ecumenical Council.
In a Vatican Library manuscript of the 11th century, there is a list of the churches that St. Helen the God-loving Queen built.  The fourth church in this list is mentioned as “The Church of Gethsemane on the Tomb of the All-Holy Theotokos.
Others believe that the first church there was built by the Emperor Theodosius the Great and others say by Theodosius the Second (+450).
Certainly though, Patriarch Juvenal built an octagon temple here during the reign of Marcian and Pulcheria.
The Emperor Maurice (+November 602) built a rotunda church again on this spot.
This temple was destroyed by the Persians in 614.  The temple was rebuilt.
The Bishop Arnulf in 670 speaks about two magnificent churches in this place, one down in the crypt where the Tomb of the Mother of God is and one above.  We read in his account that the “lower church is round and has its foundation on a rarest stone.  On the eastern side is a Holy Table and to the right of this is the Tomb of the Holy Mariam in which she was laid to rest and buried.
Mezrudin the Arab historian says that Caliph Umar when he conquered Jerusalem in 637 privately prayed twice in the Valley of the Cedars at the grave of the Mother Mariam.  Therefore this place was only considered a place for private prayer for the Muslims.
The temple was again destroyed by the Caliph Hakem in 1009 and rebuilt by the Crusader in 1130 including a monastery of the Benedictines next to it with three towers.  This monastery was called “The Monastery of Saint Mary in the Valley of Josaphat.”  This monastery was destroyed by Saladin in 1187.  Saladine however, respected the Tomb of the Mother of Christ and did not destroy it.
The Southern wall and interior stairs of this church are still in use today. The stones from the monastery were used in rebuilding the walls of the City of Jerusalem.
In the latter half of the 14 century, the Franciscans built the temple again and kept it until 1757.  Now the Latins have hold of only the cave that is adjacent to the temple.
The Greek Orthodox and Armenians have rights today in the temple and other dogmas have some lesser rights.
As is clearly seen, the Latins believed that the Mother of God was buried in Gethsemane having fallen asleep in Sion (the Latins have a monastery and church on the place of her falling asleep).
In 1841 the Latins began to say that the Mother of God lived, died and was buried in Ephesus.  This was based on the “visions” of the papist nun Anne Catherine Emmerich (+1842).
The tomb inside the present church is archaeologically speaking a Jewish tomb from the first century with a Roman facade that was placed later.  It measures 46 cm in depth and 1.85 meters in length and 1.65 meters in width.
When the Archbishop of Jerusalem Juvenal was in Constantinople for the Holy Fourth Ecumenical Council of Chalcedon (451 AD) the Empress Pulcheria begged him to give to her and her Church of the Mother of God at Vlahernes the most precious thing, that being the body of the Most Holy Theotokos which would also be safer in the ruling city.
The Archbishop replied that the body of the Theotokos was not found in the tomb after three days when the Apostle Thomas asked to see it. And so the Apostles believed that the Lord took this body into the heavens and this was confirmed by a vision.
So the pious Empress St. Pulcheria asked that the wrappings and burial bed of the Mother of God be brought to her Church and the Archbishop sent these precious things to her.
The Tomb of the Theotokos is 48 steps below the already low yard that surrounds it.  Flooding in the tomb is reported as early as 1074 in which a manuscript reports such a flood.
In 1587 a canal was built around the church, but again flooding took place in 1648.
The last two times the tomb was flooded were January 4-5, 1948 and on the 7th of February of 1972.
Descending the stairs to the tomb, on our right side are the tombs of Joachim and Ann, the parents of the Theotokos and of Queen Melisende of Jerusalem.
On our left side descending is the tomb of St. Joseph the Betrothed.
Today’s temple has an eight-meter in height dome.  To the East in this church we find the Tomb of the Most Holy Theotokos.
Tags: Mother of God Theotokos Tomb of the Most Holy Theotokos 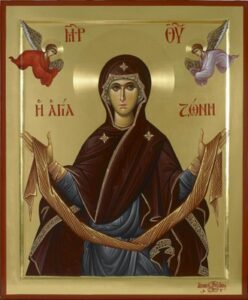 The Holy Cincture or Sash of the Mother of God 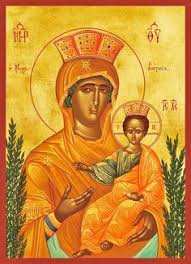 Icon of the Mother of God of “The Myrtle Tree” 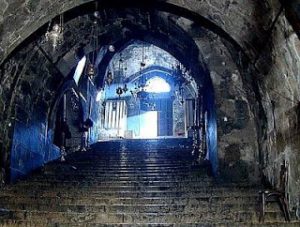 Dormition of the Theotokos by St. John of Damascus