From the life of Saint Antonina the Abbess: catacombhistory.blogspot.com

An Abbess of the Catacomb Church during Soviet times.

When her time of sentence was over, a group of twelve nuns formed a monastic community under her direction and went to the town of Tuapse with the aim of founding a secret skete high up in the mountains. In those days many monks from the ruthlessly destroyed monasteries hoped to settle in the mountains as hermits to avoid persecution from the Bolsheviks. But the minds of the GPU were sly; they placed their secret agents disguised as forest rangers all over the mountains, and one
by one they discovered the secret sketes and dwellings of these hermits – almost all of them were shot on the spot.

When Abbess Antonina climbed up to the top of one high mountain, she met a monk from the skete where Fr. Arsenius was living. In that windswept, craggy wasteland, way up high and far removed from the world, she discovered a whole monastic settlement with caves and churches and enough provisions to live and serve God daily for some time. The monks there offered to help and at once set about digging caves beneath the roots of huge trees, which became dwellings for the nuns. The monks lived in similar dwellings. They likewise constructed a church there and with joy helped the nuns in their needs. But this hidden community was not to last long.

Soon both sketes were discovered. Out of fourteen monks, only one, Fr. Arsenius who was the youngest, was spared and not shot as were the others; he was exiled for eight years to a concentration camp far away in outermost Siberia, and upon completion of these eight years, he was sent to a settlement in Alma Ata. At this time Abbess Antonina was also arrested with all her nuns. She was not shot on the spot but exiled to an unknown place. 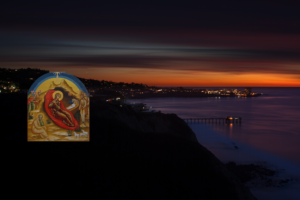 The Nativity of Christ of the True Orthodox of Greece in 1926 on the Island of Salamina – Held Outside.