The saints of God show us, time and time again, that holiness “runs in families.” There are numerous stories of how a saintly parent’s prayers brought a son or daughter to righteous living [such as St. Monica and St. Augustine], or how a devoted brother or sister influenced a sibling for good [Ss. Macrina, Basil the Great, and Gregory of Nyssa].

St. Walburga of Heidenhein is a perfect example of familial holiness. Born in Devonshire, England, around the year 710, her father was the saintly King Richard of the West Saxons, who with his wife Winna, raised their sons Willibald and Winibald, as well as daugher Walburga – by example and precept – to be devoted followers of Christ.

When Richard and his two sons left England for a pilgrimage to the Holy Land, he entrusted the 11-year-old Walburga to the nuns of Winborn Abbey. This monastic community, with their abbess Tatta, was noted for its emphasis on austerity, discipline, and learning. Here Walburga lived a quiet life of prayer and she was educated to a degree which was considered appropriate at the time for the daughter of a king. [Some years later, she wrote a Latin biography of her brother Winnibald and an account of her brother Willibald’s travels in Palestine, thus causing her to be thought of by some as the first female writer of England and Germany.] As King Richard had died a year after her arrival at Winborn, Walburga stayed on at the abbey, became a nun, and remained there for twenty-six years.

Meanwhile, an uncle of Walburga’s (her mother’s brother), St. Boniface, had left England to evangelize among the Germanic people. He determined that this work would be slow and arduous and could best be carried out with the assistance and continuity of stable monastic communities. He appealed to England for volunteers to help with this mission endeavor, and responses came from both monks and nuns. Walburga wanted to be part of this mission, so Abbess Tata sent her to the abbey of Bischofsheim, so that its Abbess Lioba could prepare her for the work. Among the important skills Walburga perfected here were those in the medical field.

After a period of two years, Walburga was appointed Abbess of the monastery of Heidenheim, a double community for both nuns and monks, which her brother, Winnibald (who had been its founder) served as head. When he died, Walburga became the head of both houses. Her virtue and holiness were evident to all in the area and her healing abilities were sought by all in physical need. Thus the missionary nun was helping to fulfill her Uncle Boniface’s vision for the Christianization of Germany.

Abbess Walburga died in 776 and her body was buried next to that of Winnibald. Miracles began to occur at both tombs and devotion to the holy brother and sister grew. Their brother Willibald followed them in death in the year 786.

During the next century, the fragility of German Christianity was apparent. There were many reversions to pagan beliefs and, despite the miraculous cures surrounding the burial site, the graves of these holy people were neglected. By the year 870, the monastery and church were not used and had begun to fall into ruin. It was in that year the Bishop Otkar of Eichstadt determined to restore the buildings. When irreverent workmen desecrated Walburga’s tomb, the saint appeared in a dream to the bishop and reprimanded him, holding him responsible for this action. So bishop Otkar decided to translate her relics to his church of the Holy Cross (later renamed St. Walburg’s) in Eichstadt.

Twenty years later, when the next bishop, Erchanbald, had the saint’s tomb opened in order to allow some of her relics to be given to churches in other parts of the world, it was discovered that her body was immersed in a fragrant oil, making St. Walburga one of the numerous elaephori, or oil-yielding saints. This oil (which has brought about many miraculous cures) continues to flow from her tom to this day (after more than 1100 years!), stopping only during times of war and when there was bloodshed in the church during a robbery.

An attempt to celebrate St. Walburga’s feast day on May 1 to counteract a pagan festival of witches’ revels for the beginning of summer has resulted in the unfortunate use of her name with the remnants of that festival, “Walpurgisnacht.”

In spite of lingering pagan beliefs through the centuries, Germany became a Christian nation, thanks to the courageous work and steadfast devotion of St. Walburga and her holy relatives. May almighty God give us such courage and devotion that our families and others around us may see his love and know his Truth.

On the Feast Day of the Holy Prophet Elias 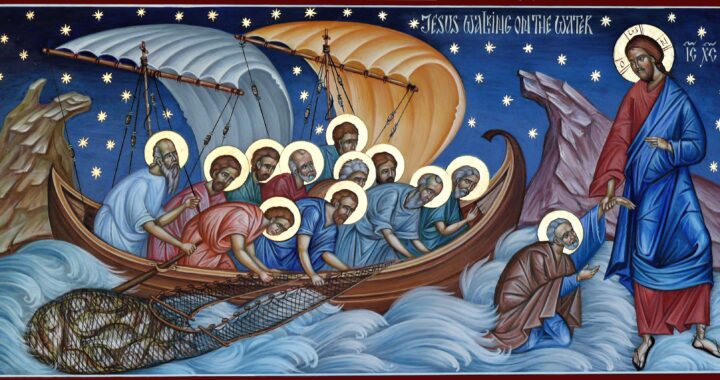 Walking Outside of the Boat

5 Questions to Prove that You Might Not Understand the Church in the Same Way as St. Gregory the Theologian