St. Philaret says this about the MP 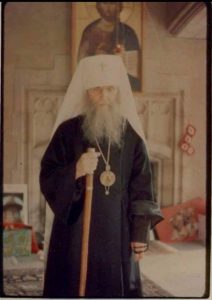 Translation of St. Philaret’s of NY words (regarding the MP):
“And here is something to which I would like to draw your attention to – something about which very many do not think about.  Father Archimandrite Constantine, whom probably many of you know, the reposed editor of the journal “Orthodox Rus’”, a profound Christian mind, considered that the most terrible among all the achievements of the communists was that the communists created their own false-church, a Soviet church which they shoved onto the unfortunate people in place of the genuine Church which went underground into the catacombs.  Do not think that I am exaggerating or that Father Constantine was exaggerating!
Once, in the year 1918, a Pan-Russian Church Council was held.  At this Council, the entire Pan-Russian Church together with its first holy hierarch, Patriarch Tikhon ANATHEMATIZED, excommunicated from the Church not only the theomachists and godless ones themselves but also ALL THOSE WHO WOULD COLLABORATE WITH THEM.”
St. Philaret speaking (in Russian) against MP  audio  1½ minutes
Tags: Metropolitan St. Philaret Moscow Patriarchate MP Orthodoxy