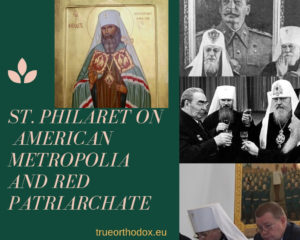 OF THE PRESIDENT OF THE SYNOD OF BISHOPS OF THE
RUSSIAN ORTHODOX CHURCH OUTSIDE OF RUSSIA
Great is the mystery of godliness: God was manifest in the flesh (I Tim. 3:16).
The radiant festal days have arrived… A long while ago, already on the eve of the Feast of the Entry into the Temple of the Most Holy Mother of God, the Church, in its solemn evening services, proclaimed the pre-festal song: “Christ is born! – Glorify Him!; Christ from the heavens – Meet Him!“, inviting its faithful children to prepare to meet the great feast day of the Nativity of Christ. And behold, this feast day has arrived, and the Christian world rejoices and triumphs, glorifying the God-Child, Christ the Savior, Who came onto the earth for us men and for our salvation.

The Holy Gospel brings to us the good news of how, on the blessed nativity night, above the fields of Bethlehem the holy angels announced to the shepherds that Christ the Lord had come into the world – and brought onto the earth peace, God’s benevolence.
Fear not: for behold, I bring you good tidings of great joy, which shall be to all people. . .
But we also know from the Gospel that this great joy was soon obscured and replaced by great sorrow; in Bethlehem and its surrounding areas the angelic singing was replaced by the wailing of the slain infants and the weeping of the orphaned mothers, and the fields of Bethlehem were covered with the blood of innocent children.
Thus it was in ancient times; thus was the “great joy” obscured by great sorrow. But do we not see also in our own stormy and extremely seditious days how our festal joy is also obscured by sorrow?
Is it not of great sorrow to us, the children of the Russian Orthodox Church, to see what is now taking place in the emigration, when before our very eyes, Orthodox hierarchs, who instead of guarding themselves and their flock from. the dominion of the red beast, are entering into close contacts and intercourse with hierarchs who are in the service of atheists and haters of God, and are striving to drag their flock along this fatal path?
One Orthodox Russian characterized the actions of the “American Metropolia” concisely and clearly: the Metropolia is receiving its “autocephaly from the red Patriarchate. But the latter is in full subordination to the Soviet regime and besides, without it, without its approval, cannot make one move. Consequently, the Metropolis is receiving its ‘autocephaly’ from the atheistic regime –from he M.V.D.*” What in essence can be said against this simple and irresistible logic?
We know under what, unprecedented in history, super-humanly distressing and tormenting conditions the church authority in the Soviet Union finds itself, under the yoke of the atheistic satanic regime. We know and pity those unfortunate hierarchs who fulfill the will of their evil masters, and who, not being free, cannot in any way be the true bearers of the voice of our suffering Mother Church. However, pitying them, we categorically refuse to have any kind of relationship with them. But if these unfortunate ones, who find themselves under a heavy yoke, undoubtedly deserve compassion and leniency, what can one say about those in the free world, who without oppression and compulsion, are freely and voluntarily extending a hand of intercourse to them, and through them, to the regime which dictates to them and orders them around?. . What a frightening temptation! What a frightening act is taking place before our eyes…
Russian Orthodox people! Let us remember the ancient apostolic call: See then that ye walk circumspectly – beware, act prudently (Eph. 5:15). Take heed for yourselves, and again take heed!
And in these radiant festal days, joyously and with thanks-giving glorifying the One Who “came down to the earth, that He might lead us up into the heavens”, let us not forget in our prayers our brothers by blood and by faith, who are suffering for the faith throughout all the vast expanse of the gigantic concentration camp, called the “U.S.S.R.” Let us also pray that the Lord, Who enlightens every man who comes into the world, will enlighten our spiritual eyes as well, will teach us to see His holy Truth and to serve it, and to be faithful children of His holy Church. With what seductive and luring delusions is life now filled! May the Lord help us, save us, have mercy on us, and keep us from them by His grace, and may He grant His peace and comfort to every faithful soul, devoted to Him, during the days of the Great and Radiant Feast!
+ Metropolitan Philaret 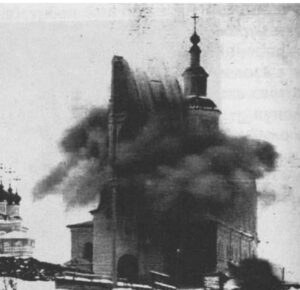 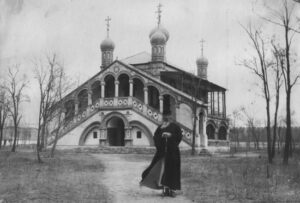 The Re-Establisher of the Russian Ecclesiastical Misson in Peking: Metropolitan Innokenty (Figurovsky) of Peking and China