Saint Guthlac of Crowland (Old English: Gūðlāc; Latin: Guthlacus; AD 674 – 715) was a saint from Lincolnshire in England. He is particularly venerated in the Fens of eastern England.

Guthlac was the son of Penwalh or Penwald, a noble of the English kingdom of Mercia, and his wife Tette. His sister is also venerated as St Pega. As a young man, Guthlac fought in the army of Æthelred of Mercia. He subsequently became a monk at Repton Monastery in Derbyshire at the age of 24, under the abbess there, Repton being a double monastery. Two years later he sought to live the life of a hermit, and moved out to the island of Croyland, now called Crowland, on St Bartholomew’s Day, AD 699. His early biographer Felix asserts that Guthlac could understand the strimulentes loquelas (“sibilant speech”) of British-speaking demons who haunted him there, only because Guthlac had spent some time in exile among Celtic Britons.[2]

Guthlac built a small oratory and cells in the side of a plundered barrow on the island. There he lived until his death on 11 April 714. Felix, writing within living memory of Guthlac, described his hermit’s life:

Now there was in the said island a mound built of clods of earth which greedy comers to the waste had dug open, in the hope of finding treasure there; in the side of this there seemed to be a sort of cistern, and in this Guthlac the man of blessed memory began to dwell, after building a hut over it. From the time when he first inhabited this hermitage this was his unalterable rule of life: namely to wear neither wool nor linen garments nor any other sort of soft material, but he spent the whole of his solitary life wearing garments made of skins. So great indeed was the abstinence of his daily life that from the time when he began to inhabit the desert he ate no food of any kind except that after sunset he took a scrap of barley bread and a small cup of muddy water. For when the sun reached its western limits, then he thankfully tasted some little provision for the needs of this mortal life.

His pious and holy ascetic life became the talk of the land, and many people visited Guthlac during his life seeking spiritual guidance from him. He gave sanctuary to Æthelbald, future king of Mercia, who was fleeing from his cousin Ceolred. Guthlac predicted that Æthelbald would become king, and Æthelbald promised to build him an abbey if his prophecy became true. Æthelbald did become king, and even though Guthlac had died two years previously, kept his word and started construction of Crowland Abbey on St Bartholomew’s Day 716. Guthlac’s feast day is celebrated on 11 April.

The 8th-century Latin Vita sancti Guthlaci is written by Felix, who describes the entry of the demons into Guthlac’s cell:

Felix records Guthlac’s foreknowledge of his own death, conversing with angels in his last days. At the moment of death a sweet nectar-like odour emanated from his mouth, as his soul departed from his body in a beam of light while the angels sang. Guthlac had requested a lead coffin and linen winding-sheet from Ecgburh, Abbess of Repton Abbey, so that his funeral rites could be performed by his sister Pega. Arriving the day after his death, she found the island of Crowland filled with the scent of ambrosia. She buried the body on the mound after three days of prayer. A year later Pega had a divine calling to move the tomb and relics to a nearby chapel: Guthlac’s body is said to have been discovered uncorrupted, his shroud shining with light. Subsequently, Guthlac appeared in a miraculous vision to Æthelbald, prophesying he would be future King of Mercia. Guthlac’s veneration continued amongst a monastic community at Crowland, with the eventual foundation of Crowland Abbey in 971. Few records survive from before the 12th century due to a series of fires at the abbey. It is known that in 1136 the remains of Guthlac were moved once more and that finally in 1196 his shrine was placed above the main altar.[6]

The story of Saint Guthlac is told pictorially in the Guthlac Roll, a set of detailed illustrations of the early 13th century. This is held in the British Library, with copies on display in Crowland Abbey.

Another account, also dating from after the Norman Conquest, was included in the Ecclesiastical History of Orderic Vitalis, which like the Guthlac Roll was commissioned by the Abbot of Crowland Abbey. At a time when it was being challenged by the crown, the Abbey relied significantly on the cult of Guthlac, which made it a place of pilgrimage and healing. That is reflected in a shift in the emphasis from the earlier accounts of Felix and others. The post-conquest accounts portray him as a defender of the church rather than a saintly ascetic; instead of dwelling in an ancient burial mound, they depict Guthlac overseeing the building of a brick and stone chapel on the site of the abbey.

The Yorkshire village of Golcar on the outskirts of Huddersfield is named after St Guthlac, who preached in the area during the 8th century. The name of the village is recorded in the Domesday Book as Goullakarres. 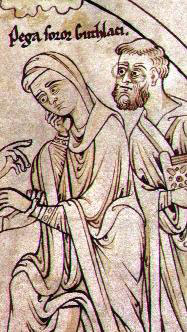 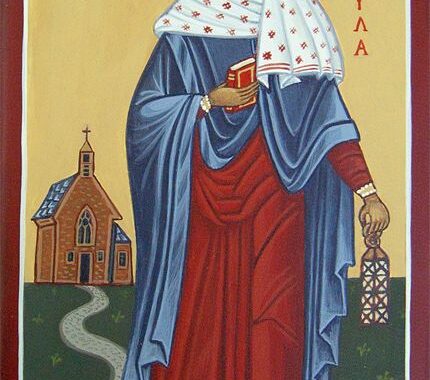