BY HIS EMINENCE ARCHBISHOP TIKHON

Today, on the second week after Pentecost, our Church celebrates a feast in honor of all the saints who have been glorified for the holiness of their lives on Russian soil. On this significant and great day, it would be wise to remember those spiritual luminaries, the spiritual leaders of our people, who, having been glorified by God Himself for the holiness of their lives, have now become our heavenly intercessors and patrons before the throne of God, whose paths in life should serve as examples for us to follow.

Like any other nation, the Russian people hold to something special of their own, which serves as the subject of their “national pride”, and although “pride is not a Christian quality,” as the ever-memorable Metropolitan Philaret of Moscow once said, we can say that our national honor, praise, joy, and consolation are all the saints who have shone forth in the Russian land. No nation in the world has such an innumerable host of saints of God, angelic in the sanctity of their lives, no Church has revealed such a wondrous face of spiritual beauty and Divine greatness as our Russian Orthodox Church. As soon as the Russian people were enlightened by holy baptism, as soon as they heard the call of Christ: “Come after Me!” (Matt. 4:19), they immediately responded to Him with thousands of hearts. If we open the menaion, we will see that there is almost no day in the year when the memory of one, two, three, or even more saints who came from among the Russian people is not celebrated.

From this follows a simple and natural conclusion: all of us, Russian people, must feel with all our being that we are the descendants and heirs of our holy ancestors, which means that we must be worthy of them – these great saints of God, who perfumed the whole Russian land with their holiness so that it received a touching name – “Holy Russia.” This name does not mean that in Russia all were saints and there were no sinful people. This means that the highest ideal for a Russian person has always been the ideal of holiness, and no matter how low a Russian person sometimes fell, he nonetheless realized the depth of his sinful fall, understood that he was sinning, and then often struck everyone with the extraordinary power of his sincere repentance.

If we look at traditional Russian culture, we will see that even now, despite the derogatory attitude towards it in our present-day Russia, it is still valued and highly respected all over the world, and many of the West’s greatest people pay tribute to the geniuses of Russian culture. But why is Russian culture so great and glorious? First of all, by the fact that she bears within herself that reflection of spiritual beauty and Divine majesty which was imparted to her by the creators and founders of Russian cultural life – all the saints who shone in the Russian land. By the fact that it is nourished and watered by the life-giving sap of the holy Orthodox Faith, based on the solid rock, which is Christ the Lord (1 Pet. 2:4; 1 Cor. 10:4), and is thoroughly imbued with the spirit of Christian self-denial, mercy and humility, the spirit of service to God and neighbor, the love of God.

The true father and ancestor of all Russian culture is Equal-to-the-Apostles Great Prince Vladimir. And today, remembering him as the ancestor of Orthodox Russia, we proclaim that Great Prince Vladimir, Equal-to-the-Apostles, is a saint, and in our time there is a monument to him on the Kiev Mountains. With a cross in his hands, he beholds Russia and the fruits of his labors. But then, a little more than 1,000 years ago, he was a pagan prince who had reached the limit of all earthly pleasures in life, unrestrained and uncouth in everything, as if he alone encompassed all the worst of Russia’s pagan past. His ascent to the heights of power was connected with the murder of his own brother. How could such a change take place in his soul? How could he be reborn as such a new person?

Christ came into his heart – this is the reason for his rebirth. And he did not continue to walk according to the lusts of his unbridled flesh, but turned with all his soul to Christ, gave Him his heart, and called all of his people to follow. The prince’s words sounded firmly and resolutely in the ears of his subjects: “Whoever does not come to be baptized is no friend of mine.” And the faithful followed their prince, believing in his election, understanding the difference between Perun, who demanded bloody sacrifices, and Christ, the God of love for all people. Of course, human character could not change overnight. People remained people, with all their inherent virtues and shortcomings, but the commandments of God had already sounded in them and bound the sin that still lived in their hearts, leading to a moral rebirth. Russia had taken the path of the Cross, the path of breaking with everything pagan and evil, with everything that bound us to the earth. And the living example of Great Prince Vladimir, in whom everyone saw the miracle of the transformation of a great sinner into a righteous man, called a whole great nation to spiritual life. In our history, the Holy Prince Vladimir, glorified by this miracle of his own conversion, stands at the origins of Christian Russia.

Vladimir the Splendid Sun – this is what the Russian people called their spiritual ancestor. And this appellation says everything: recognition and gratitude for the inherited warmth, joy, and life itself. In the 10th century, a new Russia, a new people, a new spirit, a new path, a new culture began from a Saint of God and a lord. And if we now trace the life of the Russian people from her Holy Baptism to the present, we will see that Russia followed the path determined for her by the the spirit and example of her baptist.

Today, other great saints of God, the spiritual leaders of Kievan Rus, pass before our spiritual gaze, these are the founders of the Kiev-Pechersk Lavra, Venerable Anthony and Theodosius; the builders of the Russian state – the Holy Princes, Passion-Bearers Boris, Gleb and Igor, confessors and fighters for the Orthodox faith, the founders of the spiritual power, and cultural and state flourishing of Muscovite Russia; the “Abbot of the Russian land” Venerable Sergius of Radonezh and Seraphim of Sarov, “Metropolitans of All Russia” and miracle workers of Moscow, Saints Peter, Alexy, Jonah and Philip, Hieromartyr Patriarch Hermogenes. Spreaders of spiritual enlightenment and genuine cultural life on the outskirts of Russia among the countless foreigners scattered throughout the Russian land and mired in the darkness of idolatry, Saints Stephen of Perm, Innocent of Irkutsk, Venerable Zosima and Savvaty of Solovetsky, Sergius and Herman of Valaam; John, Paul and Philotheus of Tobolsk and many others, they are innumerable – both eminent and unnamed, revealed and unrevealed.

Among the Russian saints, today we also remember the the Holy Royal Martyrs and all the hosts of the New Martyrs and Confessors, as well as St. Philaret and the Father-Confessors of the Catacomb Church – our contemporaries glorified at our Sobors of the Russian True Orthodox Church. Yesterday at Matins, when reading the canons, we heard the names of many, many Russian saints who labored in the most diverse corners of our Holy Russia, and it is clear that it is impossible to number all these heroes of the spirit. But our sacred duty, as Russian people who want to be truly Russian – not in words, but in deeds, is to become acquainted with the lives and deeds of our holy fellow tribesmen as far as is possible for each of us, and take them as an example for ourselves, for our private as well as our social and civic lives. Without this, there is no point in thinking or talking about the restoration of genuine autocratic Russia headed by the Anointed Tsar of God, about the revival of the Russian people.

Once upon a time, the fragrance of holiness permeated all of Russia, and as long as Russian man was faithful to the precepts of his holy ancestors, the Russian land grew and flourished, widened, strengthened and prospered – to the envy and surprise of its neighbors. But Russian man renounced his holy Christian name, his holy calling – and the greatest bloody disaster befell the Russian land – the Bolshevik revolution, the murder of the Royal Family and, as a result of this monstrous catastrophe – hunger, cold, poverty, the shedding of the blood of many millions of Orthodox Russian people, tears and superhuman suffering.

Back in the second half of the 19th century, our Russian theologian, ascetic and seer, St. Theophan the Recluse predicted: “By the West God has punished us, and will punish us.” And indeed, it came to us from the West, like a kind of pestilence, this terrible spiritual infection, which gradually, but very persistently, step-by-step, disintegrated everything truly good and holy in the Russian people, causing this terrible, bloody catastrophe and destroying even the very name of Holy Russia.

Faith in God, obedience to the Law of God and the determinations of the Church, Christian self-denial, mercy and humility, spiritual education and chastity – these were all ridiculed, spat upon and banished from life. In their stead, godlessness was installed, sometimes reaching fierce, frantic theomachism, impropriety, boorishness, arrogant cynicism, a ruthlessness reaching bestial cruelty directed towards others, unscrupulousness, sycophancy, groveling before superiors and those in power, hopeless, callous egoism and materialism – human life and respect for the individual have lost all value. These truly satanic qualities, to a greater or lesser extent, poisoned the souls of just over the greater part of the Russian people, and those who resolutely rejected them were simply physically exterminated, condemned to a cruel death. This is the only way to explain everything that has befallen our poor Motherland!

And if we genuinely – not merely in words – want the salvation of Russia and the restoration of Holy Russia, where everyone could live like a human and a Christian, we must become different, better, shaking off all these evil spirits so unbecoming and uncharacteristic of the sons and daughters of Holy Russia, and especially shake off any kind of godless free-thinking, boorishness, cynicism, unscrupulousness, moral licentiousness and impurity.

We must return to our lofty historical ideals – the ideals of Holy Russia, by which our pious ancestors lived and who brought up for us a majestic host of “Saints who shone in the land of Russia.” Seeing the sincerity of our good aspirations, our heavenly patrons and intercessors – all the Saints who have shone in the Russian land – will undoubtedly help us in this, if we turn our mental gaze to them more often with the prayerful appeal: “All Saints of the Russian lands, pray to God for us!” 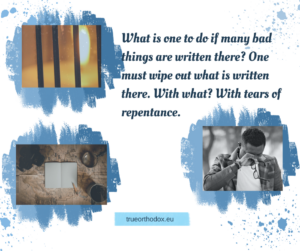 What is the parchment on which this record is written? Our conscience.