He was the son of Theophanes and Pandia. Educated by a local priest, Father Galatone, known for his learning and piety. Even as a young man, Nicodemus was disgusted by the misspent lives of his contemporaries, and was drawn to the monastic life. He tried to join the monks in the San Mercurius abbey on Mount Pollino in the Calabria region of Italy; it was a hard, ascetic life for these monks, dressed in goatskins, going bare-foot in all seasons, surviving on chestnuts and lupins with a cave for shelter and some straw for a bed, and Nicodemus was initially turned away by the abbot, Saint Fantinus, who thought the young man’s health too frail for a monk‘s life. But Nicodemus persevered, and Fantinus eventually relented and welcomed him to the community. He became a brother monk to Saint Nilus of Rossano.

Feeling the need for greater solitude, Nicodemus withdrew to live as a hermit on Monte Cellerano in Locri, Italy. His reputation for wisdom and piety followed him, though, and he soon attracted several spiritual students and organized them into a colony that lived separately but met once a week. However, his community became too well known; there were too many would-be students, too many lay visitors, and too many incursions by Saracen invaders. The monks dispersed to various monasteries. Nicodemus moved first to a house in Gerace, Italy, and then to a monastery near Mammola, Italy where he spent the rest of his life. His reputation for holiness was such that, upon his death, the monastery was renamed San Nicodemo in his honour. 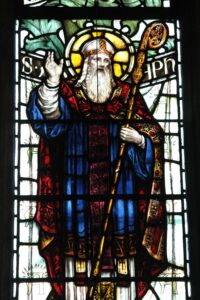