Some of the most important additions to Bede’s Prose Life of Cuthbert came from Herefrith, a former abbot of Lindisfarne. I think its worth exploring what Bede tells us about Herefrith in  the Life of Cuthbert and what we can deduce.
When Bede first introduces material from Herefrith in the plague of Melrose chapter [Ch 8] he tells us that Herefrith was a former priest of Cuthbert’s and a former abbot of Lindisfarne. In chapter 37,  where Bede relates Cuthbert’s instructions for his burial, Herefrith is described as being the abbot of Lindisfarne at that time (March 687).
Herefrith relates three key elements of Bede’s Life of Cuthbert:
1) account of the plague at Melrose
2) Cuthbert’s healing of Abbess Ælfflaed by his girdle
and
3) the account of Cuthbert’s last days.
Contrary to what Colgrave says in his notes on the plague of Melrose, Herefrith does not say that he was a member of Melrose. He says that he was a member of Cuthbert’s community and abbot at Lindisfarne and that Cuthbert used to relate the events at Melrose.   It seems likely that Herefrith had been a member of Cuthbert’s community at Lindisfarne only. As his abbot at Lindisfarne, he would have been close to the bishop, especially during his last illness.
Now being the abbot of Lindisfarne when Cuthbert died gives us several possibilities for how he lost the abbacy. He would have been abbot of Lindisfarne when Bishop Wilfrid succeeded Bishop Cuthbert for a year. This was remembered as a terrible time when many of the brothers left Lindisfarne. Was Herefrith among those who abandoned Lindisfarne? Could he have led some of the brothers away? Or is it more likely that he lost the abbacy over not being able to keep it together during the stress of Wilfrid’s tenure?
Since he is not mentioned at all in the Anonymous Life of Cuthbert, it is possible he was gone from Lindisfarne before then. If he did leave Lindisfarne and was seeking to get away from Bishop Wilfrid, then Whitby is the most likely refuge powerful enough to protect monks from Lindisfarne. When King Ecgfrith was killed Bishop Trumwine abandoned his see at Abercorn and went to Whitby. Thus Whitby would be the one place where members of the Irish party would be out of Bishop Wilfrid’s reach. Bishop Trumwine was one of the bishops who convinced Cuthbert to accept the episcopacy would have been sympathetic to his former community. There is one secure connection between Herefrith and Whitby. The story of Abbess Ælfflaed’s healing by Cuthbert’s girdle came from Ælfflaed herself to Herefrith, and from Herefrith to Bede.
Bede tells us that Herefrith was very active in reviewing notes and the text of his Life of Cuthbert. Herefrith is the only reviewer that Bede names specifically and says that he came to him to work on it. It is possible that Herefrith waited to return to Lindisfarne until after Bishop Wilfrid’s death in 709. As Lindisfarne’s former abbot he would have been most likely to want to improve the first Life and counter Stephan’s Life of Bishop Wilfrid. Although there are few direct comparisons between the lives of Cuthbert and Wilfrid, they present two very different models for bishops. It is as competing models more than quotes or common episodes that mark these two lives as being produced in opposition to one another.
We know little of Herefrith outside of his role in Cuthbert’s life and the production of Bede’s Life of Cuthbert. There is a Herefrith the priest listed among the anchorites in the Durham Liber Vitae. If this is the same man, then he seems to have followed Cuthbert’s model to his last days. 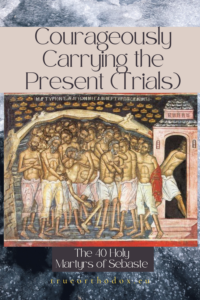 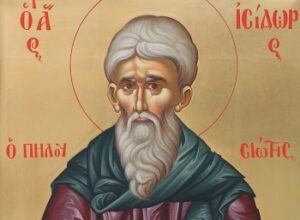 On the Deadening of the Human Spirit: A Sermon on the Sunday of the Myrrh-bearing Women By St. Ignatius Brianchaninov (+1867)