From The Prologue from Ochrid, Vol. 4

He was the son of Jonah and brother of Peter, born in Bethsaida and a fisherman by profession. He was first a disciple of St John the Baptist, but, when John pointed to the Lord Jesus and said: ‘Behold the Lamb of God’ (Jn. 1:36), St Andrew left his first teacher and followed Christ. After that, Andrew brought his brother Peter to the Lord. After the descent of the Holy Spirit, it fell to the lot of the first of Christ’s apostles, St Andrew, to preach the Gospel in Byzantium and Thrace, then in the lands along the Danube, in Russia and around the Black Sea, and finally in Epirus, Greece and the Peloponnese, where he suffered. In Byzantium, he installed St Stachys as its first bishop; in Kiev he raised the Cross on high and prophesied a Christian future for the Russian people; in Thrace, Epirus, Greece, and the Peloponnese, he brought many people to the Faith and gave them bishops and priests. In the city of Patras he performed many wonders in the name of Christ and brought many to the Lord, among whom were the brother and wife of the imperial governor, Aegeatus. Aegeatus, infuriated by this, put Andrew to torture and then crucified him. While he was still alive on the cross, the Apostle of Christ taught the Christians who were gathered around him. The people wanted to take him down from the cross, but he would not let them. Finally, the Apostle prayed to God and a strange radiance surrounded him. This light lasted for half an hour and, when it disappeared, the Apostle gave his holy soul into God’s hands. Thus the first-called Apostle, who first of the twelve Great Apostles came to know the Lord and followed Him, finished his earthly course. St Andrew suffered for his Lord in the year 62. 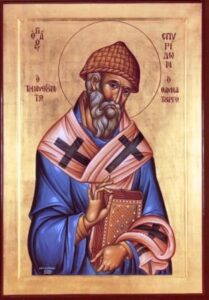