Paschal Epistle of the President of the Synod of Bishops of the Russian Orthodox Church Outside of Russia
We greet the right reverend archpastors, the right honorable pastors and our beloved flock on the great and splendid feast or which the Holy Church says that it is the “feast of feasts and solemnity of solemnities,’Our Orthodox divine services are a richest spiritual treasure, and inexhaustible .wellspring of spiritual edification and liturgical beauty.  Yet if this can be said in general of all the Church’s prayer services and hymnography~ the crown and shining summit of them all is the short and terse troparion of the Resurrection of Christ, the principal hymn, the song of triumph, of our Faith.
“Christ is risen from the dead, trampling down death by death, upon those in the tombs bestowing life!”.. It is not without purpose that throughout the paschal services on the radiant night of  Pascha and on the days of the paschal season, this troparion is constantly repeated persistently, triumphantly, as no other troparion or hymn of the Church is chanted or exclaimed.
We know from the holy Gospel that, eight days prior to His Resurrection, Christ the Saviour worked a great, tremendous, and awesome miracle: He resurrected from the dead Lazarus who had been four days in the tomb. And in the Gospel, it says that before this miracle He said to Martha, the. sister of the dead Lazarus:
I am the resurrection and the life; he that believeth in Me, though he were dead, yet shall he live.  And whosoever Liveth and believeth in Me shalt never die. (John 11:25-26)
What marvelous words!  What a wonderful promise! in them, one is given to understand that, for the believer, death itself, which is so horrible for others, ceases to be dreadful, for after it there is again life!
In these joyous words so much is said that man’s soul, which trembles before the dread specter of death, seeks confirmation, seeks proof that what is said in these words is the truth! And behold! In His own glorious Resurrection from the dead, the Lord has given mankind just such proof of the truth of His promises.  Who could verify His words if He Himself was a victim of death and lay in the tomb? But He rose from the dead in glory, and thereby He assured His faithful of the truth of His words, that He is the resurrection and the life!
It is for just this reason that the Church, on Holy Pascha, signs so triumphantly that He is risen from the dead and by death has trampled death underfoot. It chants this, and repeats it over and over, and thus insistently and joyfully summons her children to this joy, the joy of the victory of life over death.
Rejoice, O Christian soul! We live in a difficult time. Never in the history of mankind have evil and opposition to the righteousness of God appeared so brazenly, so shamelessly, so provocatively as in our sorry days. Life is literally overflowing with evil, filth, and falsehood! Yet can we fall into despondency and despair if we have faith in Him Who, warning His disciples, said to them:
In the world ye shall have tribulations but be of good cheer, I have overcome the world. (John 16:39)
And He has given His faithful a share in this victory, as His apostle says: “For whoever is born of God overcometh the world; and this is the victory that overcometh the world, even our faith” (I John 5:4)
And the principal celebration of this victory is the great and radiant feast, the “feast of feasts and solemnity of solemnities….!”

Leavetaking of Pascha – Christ is risen! 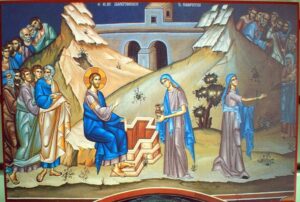