It was the feast of the Holy Unmercenaries Cosmas and Damian (1/14 November) of 1992 and a Saturday.  The weather was gray and looked like rain was on its way.  I was already a priest for 6 years.  I had arrived at Dafne of Mount Athos very early to await the old ferry to leave Mount Athos after having spent a few days in the Skete of St. Anne and other sketes.

There, by chance, I met up with the Monk Nicodemus (Christodoulopoulos) from the Monastery of St. Nicodemus of Ellinikon, Gortynias.  Monk Nicodemus suggested to me that we drink a coffee to pass the time away as we had arrived in Dafne quite early in the morning.  I accepted his offer and he purchased coffee from one of the few little shops of Dafne and we sat there drinking our coffee on some old chairs outside.

Paying little attention to what was going on around us, we sat there chatting and catching up on events we knew about.  Suddenly we noticed that a large group of people had gathered near the dock of Dafne.  I believed the crowd had gathered up waiting for the ferry, but Monk Nicodemus insisted it was too early for all of these people to be suddenly standing in front of the dock and so he set off to see what the crowd was about.  Monk Nicodemus returned and informed me that the well-known Elder Paisios was there (on his way out of Mount Athos to the nuns of the Convent at Souroti).  Monk Nicodemus then asked me to get up so we could go close to the Elder Paisios so that I could ask him something.  I was reluctant and I asked Fr. Nicodemus why he doesn’t ask the elder some question if he wants to.  Fr. Nicodemus answer was “I can’t control my laughter”.

So off we went towards the crowd!  What did I encounter there?  Everybody there was asking the Elder Paisios about some worldly matter.  One man was even asking him which car would be a better purchase!  I had decided that I wouldn’t even be bothered to ask him anything at all.  Suddenly though, my attitude changed when I heard the Elder Paisios give a woeful answer to a question he was asked.

Less than 6 months earlier, the zealot monks of the Skete of the Prophet Elijah of Karyes of Mount Athos, who were faithful of the Russian Orthodox Church Outside of Russia, were unjustly expelled from their monastery by the newly installed at that time “Patriarch” of Constantinople Bartholomew.  The first spiritual question I heard from this group was when some man there asked the Elder Paisios, “Was it right that the Patriarch banished the monks of the Skete of the Prophet Elijah from their monastery?”  The answer of the Monk Paisios traumatized me.  The Elder Paisios answered, “If a mother who is breastfeeding a baby catches a cold, we don’t take her baby away from her and give it to some other mother who has cancer”.  The Elder Paisios went on to explain that the Patriarchate of Constantinople was the mother that simply has a “cold” while the Russian Orthodox Outside of Russia was a mother with cancer!

I was shaken by the position of the Elder Paisios that the heresy of ecumenism was simply a “cold” whereas the unaltered Orthodoxy of the zealot monks of the Russian Orthodox Church Outside Russia was cancer!

Through the pain I felt, I became brave and stood close to the Elder Paisios in order to ask some question as was requested of me by the Monk Nicodemus.  I was wearing, as I always did then, a simple Athonite style skufia.  “I want to ask you a question, Geronda (Elder), but I want an answer only if you have some enlightenment from God concerning this question”, I said.  In much the same way a fortune teller would have done, the Elder started to attempt to gather information from me, where I lived, etc. in order to answer my question through “divine enlightenment”.  I remained firm in not giving him any information so that his answer would be “from God”.  I (already a priest for years) asked him, “What does God tell you, should I become a priest?” The Elder looked towards the heavens and then answered, “don’t become a priest”.

I thanked him and left.  Fr. Nicodemus, who was standing there observing this all, had already broken out in laughter. 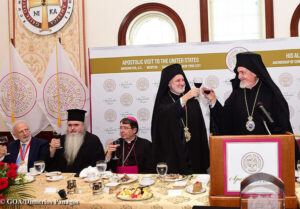 4 thoughts on “My Own Encounter with the Elder Paisios”