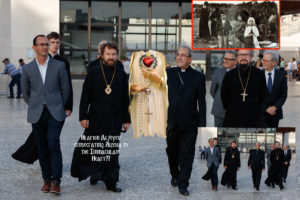 “Metropolitan”  Hilarion Alfeyev, on September 24, 2018, visited the shrine of Fatima in Portugal.    Hilarion was welcomed by Cardinal António Marto, Bishop of Leiria-Fatima, who thanked the Metropolitan for the “testimony that the Russian Orthodox Church has given to foster good relations between the two Churches”.

The so-called miracles or apparitions of Fatima have a certain and heavy connection with Russia.  The “apparitions” take place from May – October 1917, beginning just a couple of months after the first so-called “Democratic” Revolution in Russia.  Even though the revolution had just taken place, Russia was still a country with strong pious roots and Orthodox.  On July 13, 1919, the “Lady” promises to come and ask the consecration of Russia to “Her Immaculate Heart”.  On June 13, 1929, she “fulfills her promise, asking “for the consecration of Russia to Her Immaculate Heart, promising its conversion through this means and the hindering of the propagation of its errors.”

One can only wonder how and why Hilarion Alfeyev decided to visit Fatima with such a strange historical connection to the “conversion of Russia”.

In December 1940, still at the beginning of WW II,  Sr. Lucia writes a letter to Pius XII, saying that Our Lord Himself requests the Pope to “consecrate the world to the Immaculate Heart of Mary, with a special mention for Russia, and order that all the Bishops of the world do the same in union with Your Holiness.”  Being politically correct, these “divine messages” about Russia appear at strategically correct times and the Papist “Church” is always careful about directly “consecrating” Russia.

“Our Lady said: ‘The moment has come in which God asks of the Holy Father to make and to order that in union with him and at the same time, all the bishops of the world make the consecration of Russia to My Immaculate Heart.”

In a separate letter to Fr. Pierre Caillon (the head of the Blue Army in France), Sr. Lucy explained in more detail the necessity and manner of the participation of the world’s bishops:

Latin internet sites brag that after a 1984 consecration by Pope John Paul II of all the world to the Immaculate Heart:

“What happened soon after in the Soviet Union can only be seen as the hand of Our Lady.

We see that they call the conversion of Russia less perfect when they say, “Sister Lucia said the consecration of Russia was so that Russia could “get converted,” conversion meaning “change,” but that the practice of the First Saturday Communions of Reparation would make that conversion more “perfect.” This was the critical role of the laity, one of two requests Our Lady made for Russia’s conversion. Sadly, most people did not take up this practice sufficiently, so that conversion is less perfect.”

Maybe the MP bishop went to Fatima to make their conversion more perfect?

Professor Victor Khroul of Moscow State University, in an interview with Soul Magazine, said the sudden fall of atheistic communism and the change in Russia are the consequences of what St. John Paul II did. However, people did not know what to do with the new freedoms and did not know where to turn.

Again Latin sources state that, “Perhaps now is the time to invite our Russian Orthodox brothers to join in a consecration in order to please Our Lord who told Sister Lucia, “I want my whole Church (emphasis of the original article) to acknowledge that consecration as a triumph of the Immaculate Heart of Mary…”  This whole church is certainly how the ecumenists and Hilarion Alfeyev view the “Church”.

This same source says, “We all wait in hope. Fatima is hope. In the meantime, we are called to pray daily, do penance, entrust ourselves to her Immaculate Heart, wear the Brown Scapular and take up the practice of the First Saturday devotion in response to the Queen of Heaven who appeals to her children more urgently today than ever.”  We don’t know if Hilarion wore the brown scapular or not…. 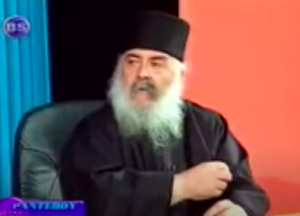 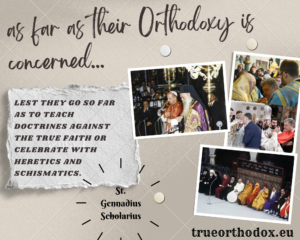