Protopriest Nicholas, of the Kirovograd diocese, was tortured to death in 1919. Once he was serving as a deacon in the St. Isaac Cathedral in St. Petersburg. At that time Tsar Nicholas was looking for a priest to serve at the church he was building in Iskrovka, Yelisavettgrad province. With the blessing of Fr. John of Kronstadt, Fr. Nicholas was chosen. He was ordained to the priesthood and set off for Iskrovka with his matushka, Anna.      Fr. Nicholas was joyful and kind and loved jokes. He even reproached sinners with humour. Once he reproached a poor bridegroom for marrying a rich, but simple-minded bride. At home they had taught the bride, if batyushka asked her how many commandments there were, to reply: ten. But Fr. Nicholas asked her how old she was. “Ten,” she replied.      Batyushka cast out demons, healed the sick, and prayed for the healing of cattle. His labours of prayer acquired for him a reputation far beyond the bounds of the Yelisavettgrad province. People would come from as far as 1000 versts away, seeking healing. In summer he said prayers at his spring, but in winter, when it was cold, in the church. Many came to listen to his sermons and became witnesses of his miracles. Thus a woman was lying on the ground thrashing around. Fr. Nicholas read the Gospel over her, and she rose healed. Once he healed a man by the name of Timothy with the help of the word of God. On being healed, Timothy remained to live with Fr. Nicholas. He worked the land and helped single mothers.      Fr. Nicholas had the gift of prophecy, which he acquired through prayer and labours on himself. Once a girl had stolen five roubles from her uncle. Batyushka told her where she had hidden the money, under some wood in a shed. He stroked her on the head and said: “Your father needs to work a month in order to earn that money,” and he told her to return it.  To another person whose horses had been stolen, Fr. Nicholas told where to find them. To a third, he prophesied that he would be dekulakized, that he would be imprisoned several times, and that he would die peacefully in freedom.      Once he said to his wife Anna with a smile: “Matushka, don’t grieve. They will kill me and will bury me three times, but you will hide under two surnames, And you, Demetrius, my son, will be a priest, and will have a large family!” It turned out exactly as he prophesied. During the persecutions, his matushka hid under two surnames…      In his sermons Fr. Nicholas spoke frequently about the coming persecutions. He said that an atheist power would come, and with it great trials. He also told about his death, and called on people to appeal to him in the future as to a living person and ask for his help after his death. He said that the church at Iskrovka would remain unharmed. But he predicted the complete destruction of another church, the Pokrovskaya in Lozovatka.      Once, early in the morning, novice Euphrosyne came into the church and heard Fr. Nicholas speaking with the Lord Himself. She heard the last words of the saint: “For Thee, O Lord, I am ready to suffer everything!” When he came out of the altar, she asked him with whom he had been speaking. He replied: “If you heard, then tell nobody while I am alive. They must kill me and then they will bury me three times.”      On the last day of his life the hieromartyr celebrated the Divine Liturgy, and then sent the people to their homes, while he remained in the bell-tower. In the afternoon a band of reds came, dragged the martyr out of the bell-tower, and dragged him along the ground by his hair. After mocking him and beating him, they dragged him to the cemetery and shot him.      The body of the confessor was found by some women coming from the fields. They buried it and covered it with branches. Later, they with some others reburied it in another place. A year later, in 1920, many priests came and carried out a third burial of Fr. Nicholas behind the altar of the church. The witnesses of this event said that the body of the confessor was incorrupt, as if they had killed him that same day.      On September 17, 2001, the body of the hieromartyr was uncovered and found to be incorrupt. Many healings have taken place through his prayers. 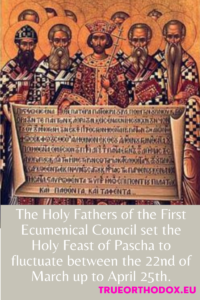 The Holy Fathers of the First Ecumenical Council set the Holy Feast of Pascha to fluctuate between the 22nd of March up to April 25th. 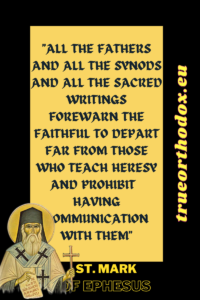