The righteous sisters Martha and Mary were believers in Christ before He raised their brother Saint Lazarus from the dead. After the martyrdom of the holy Archdeacon Stephen a persecution against the Jerusalem Church broke out, and Righteous Lazarus was cast out of Jerusalem. The holy sisters then assisted their brother in the proclaiming of the Gospel in various lands.

Martha and Mary together with their brother Lazarus were a beloved family of the Lord that lived in Bethany. The Gospel presents Mary as absorbing the teachings of Christ whereas Martha, the older sister, has the keep of the house and its guests. That is why Martha hears the famous words of our Lord, “Martha, Martha, you are worried and troubled about many things. But one thing is needed, and Mary has chosen that good part, which will not be taken away from her.” (Luke 10: 38-42)

St. Ambrose of Milan, in his “Commentary of the Gospel of Luke” says this about Martha and Maria

So there was talk of mercy. But there is not just one way to be virtuous. It is then shown, by the example of Martha and Mary, in the works of one, active devotion, in the other the religious attention of the soul to the word of God; if it conforms to faith, it passes before the works themselves, as it is written: “Mary has chosen the best part, which will not be taken from her. Let us study, then, too, in possessing what no one can take away from us, by listening not to distracted, but attentive: for it happens at the very grain of the heavenly word to be stolen, if it is sown. along the road (Lc, VIII, 5, 12). Be, like Mary, animated by the desire for wisdom: this is a greater, more perfect work. May the care of the ministry not prevent the knowledge of the heavenly word. Do not rebuke and do not judge idle those whom you will see occupied with wisdom: for Solomon the pacific sought to have him in his place (Sag., IX, 10, Prov., VIII, 12). Yet no one reproaches Martha for her good offices; but Mary has the preference, for having chosen a better part. For Jesus has many riches and makes many gifts: so the wisest chose what she acknowledged to be the main thing. Moreover, the Apostles did not consider it best to abandon the word of God and to serve at the tables (Acts VI, 2); but the two things are a work of wisdom, for Stephen also was full of wisdom and was chosen as a servant. So that the one who serves obeys the doctor, and that the doctor exhorts and animates the one who serves. For the body of the Church is one, if the members are diverse; they need each other; “The eye can not say to the hand, I do not desire your services, nor even from head to foot” (I Cor., XII, 12 ff.), And the ear can not deny that it is from the body. For if there are any, the others are necessary. Wisdom lies in the head, activity in the hands; for “the eyes of the wise man are in his head” (Eccl., II, 14), since the true sage is the one whose spirit is in Christ, and whose inner eye is raised to the heights; also the eyes of the wise man are in his head, those of the madman in his heel.

St. Cyril of Alexandria, in His SERMON LXIX says this about Sts. Martha and Mary and their hospitality:

You who love the virtues which adorn piety, and carefully practice every art which become the saints, again come and listen to the sacred doctrine, and let not the method of hospitality be unknown to you. For it is a great and valuable quality, as the wise Paul testifies, where he writes, “Forget not hospitality: for thereby some have entertained angels unawares.” Let us learn therefore of Christ, the Saviour of all, this also, as well as all other things. For it would be a disgrace to us, that while those who desire worldly wisdom, and gather written learning, select the best teachers for their instructors; we who are encouraged to pay earnest heed to doctrines of such surpassing value, and may have as our instructor and teacher Christ the Giver of all wisdom, do not imitate this woman in her love of learning, even Mary, who sat at the Saviour’s feet and filled her heart with the doctrines He taught, feeling as if she could never have enough of what so profited her.

For the Saviour lodged with the holy women, but Mary, it says, listened to Him as He taught; while the other, Martha, was distracted with much service. She, therefore, besought Him that her sister might share her carefulness with her. But Christ consented not, saying, “Martha, Martha, you are anxious and busied about many things: only few things are required, or but one.” And He further praised Mary, that “she had chosen the good part, which shall not be taken away from her.” For the acquisition of spiritual blessings is never lost.

The first thing however which we must examine is the manner in which the Saviour again benefits His disciples, by setting Himself before them as an example, in order that they may know how and in what manner to behave in the houses of such as receive them. For they must not immediately on entering indulge themselves in relaxation or suppose that this is the reason why they lodge with men, but rather that they may fill them with every blessing, and the divine and sacred doctrines. So somewhere the blessed Paul also sends a message to certain: “For I desire to see you, that I may give you some spiritual gift, that you may be confirmed.” Observe, therefore, that our Lord Jesus Christ, on entering to lodge with these holy women, did not cease from giving instruction, but still grants them, without stint, the sober doctrines of salvation. And one of these women was steadfast in her love of hearing: but Martha was distracted with much serving. Does anyone then blame her for being occupied with careful service? By no means. For neither does the Saviour chide her for having proposed to herself the discharge of this duty; but rather He blamed her, as one who was laboring in vain, by wishing to procure more than was necessary. And this He did for our benefit, that He might fix a limit to hospitality. For far better is that other part, of earnestly desiring the divine doctrine.

We do not then say that the wish to entertain strangers, when it does not aim at anything excessive, is to be despised, and is no service. The saints especially are bound to be content with little, and when they eat and are prevailed upon to draw near to the table, they do so, rather to appease the infirmity of the body, in accordance with the laws of nature, than as caring about pleasure and relaxation. When therefore we lodge with the brethren, in wishing to reap their corporeal things, let us first sow for them things spiritual; and imitating therein careful husbandmen, let us lay bare their hearts, lest some root of bitterness spring up and injure them: lest the worm of human innovation attack them, and work in them secret decay. And if anything like this has happened, then thrusting forthwith into their minds the saving word of instruction, like the teeth of the mattock, let us eradicate the root of ungodliness; let us pluck up the heretical darnel from the very bottom; let us implant the knowledge of the truth: thus we may reap the corporeal things of those who have a superfluity, receiving them as a matter of debt: for the workman, He says, is worthy of his hire. And the law of Moses, hinting at the same truth, says somewhere in like manner, “You shall not muzzle the trampling ox.” And as Paul said, “Does God care about oxen? Or does He say it altogether for our sakes?” You therefore will give things more valuable than those you receive from men: for things temporal. You will give things eternal: for earthly things, heavenly things: for the things of sense, things intellectual: for the things that perish, things that endure. And thus much of those who receive hospitality.

But let those who open to them their house, meet them cheerfully, and with alacrity, and as their fellows: and not so much as those who give, but as those who receive: as those who gain, and not as those who expend. And the more so as they profit doubly; for in the first place they enjoy the instruction of those whom they hospitably entertain: and secondly, they also win the reward of hospitality. Every way therefore they are profited. When however they receive the brethren into their house, let them not be distracted with much service. Let them not seek anything beyond their means or more than sufficient. For everywhere and in everything excess is injurious. For often it produces hesitation in those who otherwise would be glad to receive strangers, and causes but few [houses] to be found fit for the purpose: while it proves a cause of annoyance to those who are entertained. For the rich in this world delight in costly banquets; and in many kinds of viands, prepared curiously often with sauces and flavours; a mere sufficiency is utterly scorned, while that which is extravagant is praised, and a profusion beyond all satiety is admired, and crowned with words of flattery. The drinkings and revellings are excessive; and the draining of cups, and courses of wines, the means of intoxication, and gluttony. But when holy men are assembled at the house of one who fears God, let the table be plain and temperate, the viands simple, and free from superfluities: but little to eat, and that meager and scant: and a limited sufficiency of drink. In everything a small supply of such necessaries as will allay the bodily appetite with simple fare. So must men receive strangers. So too Abraham by the oak at Mamre, received those three men, and won as the reward of his carefulness, the promise of his beloved son Isaac. So Lot in Sodom honoured the angels, and for so doing, was not destroyed by fire with the rest; nor became the prey of the inextinguishable flame.

Very great therefore is the virtue of hospitality, and especially worthy of the saints: let us therefore also practice it, for so will the heavenly Teacher lodge and rest in our hearts, even Christ; by Whom and with Whom, to God the Father be praise and dominion, with the Holy Ghost, forever and ever, Amen. 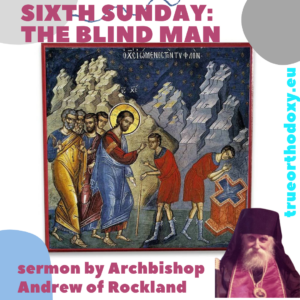 Sunday of the Man Born Blind