Concerning the “House where the Virgin Fell Asleep”

Unlike today, up until the 19th century, both the East and the West believed that the Theotokos or Mary the Mother of God fell asleep in Sion (where the home of St. John the Apostle was) and was buried in Gethsemane.

A narrative known as the Euthymiaca Historia (probably written by Cyril of Scythopolis in the 5th century) relates how Emperor Marcian and his wife, the Virgin Empress Pulcheria requested the relics of the Virgin Mary from St. Juvenal, the Patriarch of Jerusalem, while he was attending the Council of Chalcedon (451). According to the account, Juvenal replied that, on the third day after her burial, Mary’s tomb was discovered to be empty.  Only burial articles were found in it but not the body of the Most Holy Theotokos.

A small church on an octagonal footing was built by that same Patriarch Juvenal) over the location in the 5th century, and most probably where a more ancient church of St. Helen had existed according to tradition. The church built by Patriarch Juvenal at the request of St. Pulcheria was destroyed in the Persian invasion of 614. During the following centuries the church was destroyed and rebuilt many times, but the crypt was left untouched. This shows the ancient belief that the tomb of the Theotokos was in Gethsemane.

In the 62 lines of text of “The Breviarius of Jerusalem” or short description of Jerusalem, a text written in perhaps in AD 395 by an unknown author, mention is made of the basilica of Holy Mary in the valley, which contains her sepulchre. Later, Saints Epiphanius of Salamis, Gregory of Tours, Isidore of Seville, Modest, Sophronius of Jerusalem, German of Constantinople, Andrew of Crete, and John of Damascus talk about the tomb being in Jerusalem and bear witness that this tradition was accepted by all the Churches of East and West.

The 3rd century Book of John about the Dormition of Mary places her tomb in Gethsemane, as does the 4th-century Treatise about the passing of the Blessed Virgin Mary.

St. Isidore of Seville (d. 636) said of the death of Mary: “. . . nowhere does one read of her death. Although, as some say, her sepulchre may be found in the valley of Josaphat.” The valley of Josaphat and the Gethsemane touch each other in the place of the tomb of the Theotokos that is known to us until today.

It was rebuilt then in 1130 by the Crusaders, who installed a walled Benedictine monastery, the Abbey of St. Mary of the Valley of Jehoshaphat. In the second half of the 14th century, Franciscan friars rebuilt the church once more.

In 1972, Bellarmino Bagatti, a Franciscan friar and archaeologist, excavated the site and found evidence of an ancient cemetery dating to the 1st century. Bagatti interpreted the remains to indicate that the cemetery’s initial structure consisted of three chambers (the actual tomb being the inner chamber of the whole complex), was adjudged in accordance with the customs of that period. Later, the tomb interpreted by the local Christians to be that of Mary’s was isolated from the rest of the necropolis, by cutting the surrounding rock face away from it. An edicule was built on the tomb. (Alviero Niccacci, “Archaeology, New Testament, and Early Christianity”, Studium Biblicum Franciscanum, Faculty of Biblical Sciences and Archaeology of the Pontifical University Antonianum in Rome)The Franciscans have a grotto outside of the Church of the Dormition and by the Status Quo of the Holy Land,  they are allowed a procession once a year to the tomb of the Theotokos. 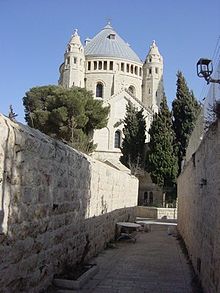 As far as the place of the Dormition of the Theotokos in the house of St. John the Theologian, Apostle, and Evangelist, the present day shrine is also held by Roman Catholic monks.  A monastic order built a basilica known as the Abbey of Our Lady of Mount Zion.  A church was established at the site in the 12th century,  built on the ruins of the earlier Byzantine church. The 12th-century church was again destroyed. The Abbey is placed under the direct supervision of the Abbot-Primate of the Benedictines in Rome.

A Second Place of the Dormition?

Where did the idea about a home in Ephesus where the Mother of God ended her days start out?

Ann Catherine Emmerich (8 September 1774 – 9 February 1824) was an Augustinian nun of the Roman Church.  She supposedly saw visions which told about the Mother of God falling asleep in Ephesus and being buried also in Ephesus but it seems that her followers never found a tomb of the Mother of God in Ephesus but just her house.  According to Ann, “The sepulcher prepared for her on the Mount of Olives was always held in honor, and later a church was built over it, and John Damascene (so I heard in the spirit, but who and what was he?)”.  Prelest in all its grandeur!

During her bedridden years, a number of well-known figures visited her.  The poet Clemens Brentano interviewed her at length and wrote two books based on his notes of her visions and which described the location and appearance of a small isolated house near Ephesus, where she said Mary lived and died. Emmerich also said that Mary was buried near the house, although to date no grave has been found.   The authenticity of Brentano’s writings has been questioned and critics have characterized the books as “conscious elaborations by a poet” and a “well-intentioned fraud” by Brentano.

Neither Brentano nor Emmerich had ever been to Ephesus, and the city had not yet been excavated; but visions contained in The Life of The Blessed Virgin Mary were used during the discovery of the “House of the Virgin Mary”, the Blessed Virgin’s supposed home before her Assumption, located on a hill near Ephesus, as described in the book Mary’s House.

The Holy See has taken no official position on the authenticity of the location yet, but in 1896 Pope Leo XIII visited it and in 1951 Pope Pius XII initially declared the house a Holy Place. Pope John XXIII later made the declaration permanent. Pope Paul VI in 1967, Pope John Paul II in 1979 and Pope Benedict XVI in 2006 visited the house and treated it as a shrine. In 1881, a French priest, the Abbé Julien Gouyet used Emmerich’s book to search for the house in Ephesus and found a house supposedly based on the descriptions. He was not taken seriously at first, but a nun named Marie de Mandat-Grancey persisted until two other priests followed the same path and confirmed the finding.

Today another group of Benedictines, Benedictine nuns, have made a monastery below this “shrine” in Ephesus and so we have Benedictines keeping two shrines in two faraway lands both claiming to be the site of the Falling Asleep of the Mother of God and Roman Catholics have one tomb of the Theotokos in Jerusalem and one tomb that Emmerich says the Mother of God was buried in somewhere in Turkey.

And Man Said, Let Us Make God in Our (So Now Very Sinful) Image, After Our Likeness 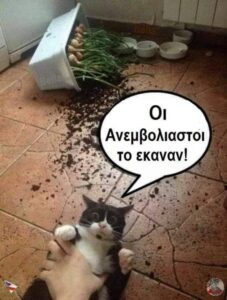 The Unvaccinated are to Blame!