The true story of the Icon of Máriapócs, also known as the Nankovo Icon of the Mother of God, is significantly different from the legend that is spread in Hungary by the Uniate “Greek” Catholics who claim that this Miraculous Icon was painted by one of their laymen. The truth is that this Holy Icon was not painted by hand and has appeared to the Orthodox Faithful near the Town of Nankovo in the region of Transcarpathia, in the Kingdom of Hungary.
Next to Nankovo ​​in Transcarpathia, there is a monument with a huge marble plaque beginning with the inscription:
“A few kilometers from the city of Nyíregyháza, which is in Hungary, there is a monastery with the icon of the Blessed Virgin Mary, also known as the miraculous Nankovo Icon of the Mother of God…”
The inscription on the board tells you how and what happened in this place in the 16th century:
“There were only a few houses in the village, but all of them were inhabited by very rich people. They owned large plots of land called Podolejs. Because of their scarcity, not only were they unwilling to sacrifice land from their estates to establish the monastery, but they did not even make room for a tiny little chapel. They brought oxen to move away the miraculously appeared icon, but they couldn’t move it until they promised that the icon would be taken to Pócs (next to the city of Nyíregyháza). In Pócs, the icon was repeatedly teared by the infidelity of her children*.

“In Nankovo, where the icon appeared, there is a spring that had not subsided since 330 years, although the area was repeatedly hit by such a drought that the wells around the town dried up. The water also resulted in miraculous healings. This place, called Poljanka, is very dear to the Most Holy Mother of God. She protects the village from all dangers and enemies, and in 1914 a painter of unknown Hungarian origin made a copy of the original icon, which he gave to the village of Nankovo. The icon is located on the right side of the iconostasis in the church of Nankovo.” 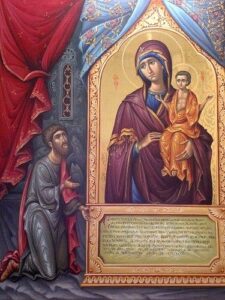 The Icon of the Mother of God “Unexpected Joy” (“Nechayanaya Radost'”) 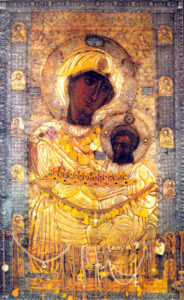 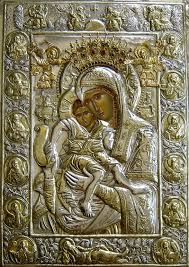 Ἄξιόν Ἐστι It is Truly Meet